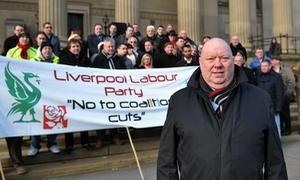 Joe Anderson, the leader of Liverpool City Council, is trying to paint himself as some kind of anti-cuts rebel. On 29th January he joined an anti-cuts march in Liverpool, not long after he wrote to David Cameron to withdraw Liverpool from the Big Society, and now he is asking people to march against the cuts this Sunday. This is nothing more than cheap political opportunism, and it should be rejected.

He tells us that the council is "bracing itself" for the cuts. He "warns" us that compulsory redundancies in the council will come. He is "incensed" by Liberal Democrats accusing him of having a "politically motivated" approach to job cuts.

But, for all the talk, he and his council are the ones who will be wielding the axe in Liverpool, and who have already promised that 1,500 jobs will go, and who has made the decision to rob people of their livelihoods whilst their own pay and pensions are entirely secure.

Anderson claims that cuts aren't "what I'm about," but in the same breath states that "we're not deficit deniers." He accepts the arguments put forward by the government that cuts are needed, and all claims to oppose what is happening amounts to crocodile tears.

That is why, on the anti-cuts march in Liverpool last Saturday, he faced chants and heckles, and several protesters confronted him about what he was doing. People are beginning to see through the lie that Labour are in any way a party of the "left" or of the working class.

Despite his gestures, Anderson and other Labour politicians on local councils are greasing the wheels so that the government's attacks filter smoothly down to a local level. But when both Ed Miliband and Ed Balls accept the need for public spending cuts, who would be foolish enough to think otherwise?

Party politics does not serve the interests of the working class, either in this fight or more broadly. This struggle does not hinge upon arguments but upon the balance of class power, and we will only see those in power yield when we can shift that balance through direct action.

Those who claim to represent us are nothing but a dead weight. We must continue to call out and cast off parasites such as Anderson, in favour of militant working class self-organisation.

This article was published on 18 February 2011 by the SolFed group in Liverpool. Other recent articles: