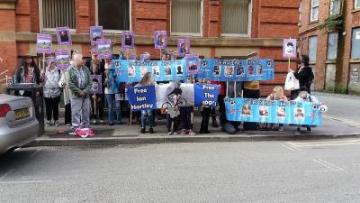 On Saturday September 16th, Manchester SolFed took part in a demonstration organised by the Smash IPP campaign. Imprisonment for public protection (IPP) is a brutal system under which people find themselves rotting in prison for years without any idea of when they will be released. Under IPP, people as young as 16, after being given initial sentences of two years or less for petty crimes, such as theft of a mobile phone, still find themselves locked away in prison after as much as ten years or more later. As one IPP campaigner noted, being locked away in prison for year after year with no idea of when you will be released is nothing less than a form of mental torture. Needless to say, many prisoners serving IPP sentences suffer from mental health problems, reflected in the fact that a large number of IPP prisoners resort to self harm as a coping mechanism. The injustice of IPP was finally acknowledged by the government when it was abolished in 2012. However, the legislation was not made retrospective, which means that there are still over 4000 people locked away in prison indefinitely. Further, many of the people released from IPP are released under licence and often face being “recalled” for as little as exhibiting “risky” behaviour involving drugs or alcohol.

We urge everyone to get involved in the fight against IPP by contacting Smash IPP at info@smashipp.noflag.org.uk, on Facebook at https://www.facebook.com/smashipp/, or by post at Smash IPP, c/o Next to Nowhere Basement, 96 Bold St, Liverpool, L1 4HY.

Below is an article by Joanne, who is part of Smash IPP and is campaigning for the release of her partner, Ian Hartley, who is still in prison after 12 years after having been given an initial IPP sentence of three years.

In England and Wales, the imprisonment for public protection (IPP) sentence was a form of indeterminate sentence introduced by s.225 of the Criminal Justice Act 2003 (with effect from 2005) and abolished in 2012.

Lord Blunkett brought in the sentence for offenders that were extremely high risk, such as murderers and paedophiles. However, due to judges and such like not being aware of what they should be used for, instead of 900 offenders receiving one, 9000 have received one. Since the sentences were abolished in 2012, 4000 offenders still remain in prison.

Originally, when the sentence was brought in, offenders were set a minimum term (tariff) which they must spend in prison. After they had completed their tariff, they could apply to the Parole Board for release. The Parole Board was told to only release an offender if it was satisfied that there was no longer a necessity for the protection of the public for the offender to be confined. However, this was not the case; even the most vulnerable of offenders who have completed all courses asked of them whilst in prison, are still awaiting release.

In an article on the 16th August 2017, 15 years since the IPP’s implementation, and five years since it was abolished, its creator, Lord David Blunkett, says he made a mistake. “I’m to blame for IPP,” he says in an exclusive interview, “and we would do it differently now. If I had my time again I would have ensured from the beginning that the IPP could only be applied for people with very substantial tariffs.” This does not help those still in prison, with no release in sight, and away from those that they love.

The Guardian reported on the 14th of August 2017 that Nick Hardwick, Chair of the Parole Board, and also former Chief Inspector of Prisons in England and Wales, told BBC Radio 4’s Today Programme that hundreds of prisoners are serving time several years over the minimum tariffs set for them, and many are prone to self-harm as a result. “The levels of suicide, assault, and self-harm are unacceptably high. It’s the fault of political and policy decisions that should have been put right two years ago.” Recent figures show that there are 550 incidents of self-harm for every 1000 IPP prisoners. This compares with 324 incidents for every 1000 prisoners serving determinate or fixed terms, and is more than twice the rate of 200 per 1000 prisoners for those serving life sentences.

A report released by the Criminal Law and Justice Weekly on the 7th January 2017 stated that the recall rate for IPP sentence prisoners was high compared with those with life sentences (indeterminate sentence prisoners (ISPs)). In 2015, around 500 IPP sentence prisoners were released, but 391 were recalled in this period. Most of this was not related to reoffending, but rather to “risky” behaviour, such as the use of alcohol/drugs, which can still manifest in the community. In addition, through discussion with recalled IPP prisoners, there is some anecdotal evidence that gaps in the provision of some key community services, for example mental health services, can lead to a breakdown of the release plan.

The reasons for recall vary greatly, from relatively minor breaches in licence conditions to serious reoffending. Once recalled, prisoners often spent months in prison before a decision was made about whether the recall was justified, and whether they should remain in prison. However, the Parole Board says the serious reoffending rate for IPP prisoners on release is very low, estimated at less than 1%.
My partner, Ian Hartley, is suffering greatly from the mental torture of serving this inhumane sentence and actually wrote a letter informing people of his thoughts and feelings (http://smashipp.noflag.org.uk/a-letter-from-ian-hartley-imprisoned-on-an-ipp-sentence/). Each time I visit him, he tells me of the long nights when he lies in his cell, scared of what he is thinking. He has told me that the only reason he has not committed suicide is because of me and how I would feel if I was left without him. It is cruel to keep a human being on an indefinite sentence, expecting them to complete courses and adhere to instructions when there is no end in sight for them.

I leave each visit with a heavy heart, knowing that I have left Ian alone and isolated. It absolutely breaks me thinking of him in that cell, surrounded by four walls, with no expectations or hope whatsoever. I will do everything I can by way of protesting and marches to raise awareness of the remaining serving IPPs and also those that are at risk from recall. But at the end of the day, it is down to David Lidington, Justice Secretary, to do something about these prisoners. Many have served their time plus an extra sentence because they have been left and forgotten about after the abolition of IPP sentences in 2012.

This article was published on 17 September 2017 by the SolFed group in Manchester. Other recent articles: