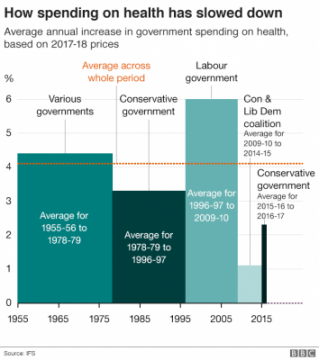 The differences between the various national and governmental responses to the Covid-19 (coronavirus) outbreak aside, what they hold is common is a crumbling defence of ultra-neo-liberal policies. By this we mean, as the UK government has shifted from its primary concern to shore up the economy to showing concern about the health of the population, the idea that the state should not intervene in the financial sphere has practically been thrown out of the window. Even the most ideologically-led and fervent advocates of the “minimum state” have had to cave in to a looming disaster that would spell even the end of market capitalism. While anarchosyndicalists are not in favour of a minimum state – we want to abolish the state – we have constantly criticised the politics that sustain this approach. We have constantly argued for greater public funding of the NHS, the railways and education on the basis that these are aspects of our society that make lives better and don’t just provide for the rich.

Now, with the potential collapse of the airlines, huge stresses on the NHS and the prospect of many firms going out of business, the laissez faire model of the “market dynamic” that allows some to prosper and many to fail, is swiftly being revised. Huge money trees have suddenly sprouted up despite the Tories stating for years that none were to be seen and big and small firms may well receive large payouts to sustain themselves. But the question is: in the UK how will workers and their families sustain themselves? How will the Health Service operate in light of this crisis? Now we see a decade of austerity and cuts come into sharp focus. The Tories have literally been putting our health and livelihoods at stake for years. Those demanding Brexit and a return for “British sovereignty” may well now find themselves without the (foreign) nurses and doctors to care for them in hospitals and GP surgeries.

We demand:
1) Adequate resourcing for the Health Service and proper protection for health workers
2) Seizure of private hospitals and beds for coronavirus patients without the NHS having to pay huge to “rent” these facilities
3) Compensation for workers facing redundancy and a huge pay gap as a result of the virus including the establishment of a real living wage on a temporary basis
4) Free testing for people who feel they have the virus
5) A freeze on rent and other bills

Boris Johnson and others have called for a return of the “Blitz spirit” and the like as part of a nationalist drive to prove that Brits can cope in the face of a crisis. Meanwhile, ever practical, people have been forming local and national Covid-19 Mutual Aid groups to take care of the elderly, vulnerable, needy and ill in society. This is the kind of response we praise – real social and collective solidarity regardless of race, gender, family type or nationality. Be kind to your neighbours, help them and support workers who are in peril as a result of this virus.

This article was published on 20 March 2020 by the SolFed group in Manchester. Other recent articles: