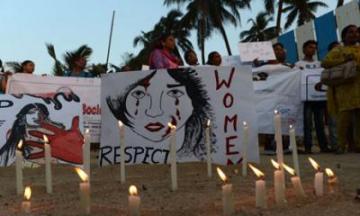 Early morning, 29th December, a 23 year old woman died in a hospital in Singapore surrounded by her family. 13 days earlier she had been brutally gang raped by six men whilst travelling on a bus in Delhi with a male friend. The attack caused irreparable damage to her vital organs and has triggered outrage across the world.

Since the attack on 16th December, protests have erupted in Delhi and other cities in India such as Mumbai and Calcutta. Women, men and children have joined together, furious at the police and government constantly turning a blind eye to attacks and a systematic bias towards rapists and abusers. Evidence of the police's complete inability to handle cases of rape came last Wednesday, when, devastatingly, a 17 year old girl committed suicide after police in the Patiala region of the Punjab tried to get her to drop rape charges and marry one of her attackers. Violence remains a problem for women in India; of 256,329 violent crimes recorded in India last year, 228,650 were towards women. This doesn't take into account all the women who felt too afraid of victim blaming and repercussions to report.

The majority of the protests in India have focused on both the attitude of the authorities and also the cultural attitude to rape and violence towards women. Placards have called for people to allow their daughters to go out and to educate their sons on sexual violence, others for rapists and attackers to be killed. Police have attempted to crack down on protests, closing metro stations, banning gatherings of more than 5 people in Delhi and using water cannons, batons and tear gases against the protestors, but people are still demonstrating, pulling down barricades that the police have erected to keep crowds back. The authorities are afraid that the death of the woman in Singapore will only cause more public anger.

It is clear that there is a deeply ingrained problem in India, but Rape Culture is not an Indian problem, it is a global problem. It is dangerous and insulting to women to say it is a problem "over there" and not something we have to worry about here. There is a reason that in the UK, around 400,000 women are sexually assaulted and 80,000 are raped each year and there is a reason that the conviction rate in the UK is only roughly 6%: women are scared to report, women are blamed and accused of lying when they do choose to tell people about their assault and as a society we find it easier to look away from abuse and rape rather than tackle the problem head on.

As a group trying to tackle rape, sexual assault and sexual harassment in our own community, Liverpool Solidarity Federation expresses solidarity with feminists and feminist allies in India and worldwide who are taking direct action against assault and deep-rooted attitudes of victim blaming, slut shaming and denial of a problem that is so clearly existing.

This article was published on 29 December 2012 by the SolFed group in Liverpool. Other recent articles: