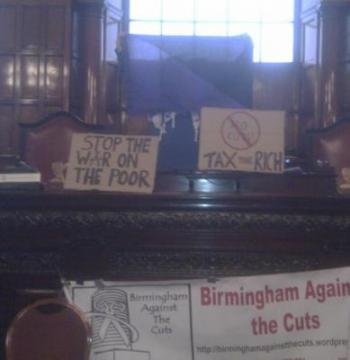 A group of activists gained entrance to the building and the chamber without much trouble and proceeded to drape banners and place placards around the room. Simultaneously, this statement was released online explaining the reasons for the occupation. After being aimlessly followed around by security staff for a short time, people began to make themselves at home, occupying the chairs behind the bench at the head of the chamber and draping them with flags.

Journalists and photographers from the Liverpool Echo and Radio Merseyside began to arrive soon afterwards, taking several pictures of banners and placards through the chamber windows and conducting several interviews with occupiers and comrades outside the building.

The police arrived after around half-an-hour and immediately began making ridiculous threats to arrest people for a breach of the peace. Everybody decided to stand their ground, prompting frantic radio talk from the police and a stand-off of around half-an-hour or so. Then the mayor of Liverpool, Joe Anderson, arrived.

He made a show of reading the statement released earlier and then proceeded to attempt to lecture the occupiers about “living in the real world” and how he’d “been a socialist since before most of you had been born”. Anderson seems to have an odd idea of what socialism is, with his history of bragging about his exorbitant salary outside the town hall and repeatedly addressing protesters as scum.

Under a barrage of questions and criticism from the occupiers, and unable or unwilling to tell those in attendance who actually owned the town hall, Anderson beat a retreat from the chamber while threatening that the occupiers would soon be removed by force.

The occupiers refused to be bullied from the chamber and convened a meeting where it was decided that, with the point made and a few hours already spent in the chamber, and with very young children present, the occupation would be brought to a close.

The occupiers left peacefully and of their own volition, but not before one scowling council security guard attempted to pick a fight with one member of the group, confronting him in the corridor outside the chamber, shouting and jabbing his finger in the comrade’s face.

On leaving the town hall, the occupiers were greeted with cheers and applause from those assembled outside, where several banners had been hung in protest against both the austerity being imposed  by central government and against Labour councils attempting to portray themselves as victims of the cuts they are implementing on behalf of the Tories and Liberal Democrats. The real victims of austerity today decided that enough was enough.

It’s clear that this fight can’t be won while we rely on politicians of any party to offer token assistance to the working class. The working class, whether in or out of employment, whether young or old, in education or not, must come together. We are in the best position to solve our own problems. With his six-figure salary and chauffeur-driven limousine insulating him from the real effects of the cuts he is forcing on the working class of Liverpool, Joe Anderson today showed us why.

This article was published on 18 January 2013 by the SolFed group in Liverpool. Other recent articles: