Friday 13th of March saw an estimated 50,000 public service workers on strike across Northern Ireland in opposition to the Stormont House Agreement. Between 6 - 8,000 striking workers and their supporters marched in Belfast, up to 2,000 marched in Derry and hundreds more took part in rallies in other towns across the north.

Friday's strike action showed the depth of opposition to attacks on working class people that are already being implemented, and those proposed, by the Stormont executive. If we are to defeat the cuts the action needs to be built upon and broadened to include workers in areas that have already been privatised and the private sector in general. Belfast Solidarity Federation support calls to declare May 1st the next strike date.

Attached is the copy of the Leveller that we produced for the strike.

Executioner for the rich, George Osborne, has challenged ‘our’ local parties to fully implement welfare reform measures that will see even greater hardship, poverty and homelessness heaped upon poor and vulnerable working class people across the north. (From the December issue of The Leveller, publication of Belfast SolFed)

The mobilisation, anger and direct action of working class people opposing water charges in the south has got the government on the run. Much is made of a brick thrown at Garda and Joan Burton being trapped by a ‘mob’ in her car during a water charges protest. Little to nothing is said about police violence against protestors or the devastating impact this charge will have on poor working class families. Families already devastated by attack after attack upon them by bosses and government in the name of ‘austerity’.

On the evening of 29th November Belfast Solidarity Federation took to the streets of Belfast with over 300 others to reclaim the night.
Set to become an annual event we all marched to demand an end to harassment and violence against women. There were speakers from Hollaback, Sex Workers Alliance Ireland, NUS USI Women’s Campaign, the Black and Minority Ethnic Women’s Network, Belfast Feminist Network and Gender Jam NI.
Somewhat at odds with the notion of taking direct action on our city centre streets the last speaker welcomed the police presence indicating they were there to “protect us” and without a hint of irony proceeded to announce we were reclaiming the night! 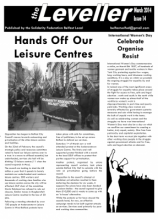 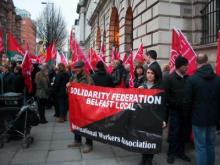 Opposition has succeeded in stalling Belfast City Council's moves towards outsourcing and privatisation of the cities leisure centres and facilities.
On the 22nd of February the council’s strategic policy and resources committee voted to hand our leisure centres over to a trust. In a move to offload essential, but underfunded, services city hall will be ditching 10 leisure centres (11 when the council expands in May).
The council are looking to shed the £8 million a year that it spends to barely maintain our underfunded and rundown leisure centres. 300 workers and thousands of working class families who use leisure centres across the city will be affected. DUP chair of the committee Gavin Robinson has refused to rule out closures. Similar moves in Magherafelt Leisure Centre resulted in the loss of 30 jobs.

On Monday 24th June Conductors and Station Staff from Northern Ireland Railways who are members of the GMB union staged a 24 hour stoppage over managements proposed pay deal, sick pay, new working arrangements and a history of steadily worsening industrial relations. The management proposals would see only one Conductor working longer trains where there are presently two, which is a threat to future job retention and creation. The proposed changes to sick pay would mean than staff with 'unacceptable' absence levels go on to Statutory Sick Pay.

Anti-choice campaigners in Ireland like to insist that there is no ‘need or desire for abortion in Ireland’. Except, not only are they wrong, but were they right, it does not mean it should be unavailable for those who do need or want it. According to official figures over 4,000 women and girls travelled to England and Wales last year to have an abortion, and more than 152,000 have done so since 1980.

The death of Thatcher, British Prime Minister 1979 - 1990, was marked by celebration across the left and by working people everywhere. Members of the Belfast Local of the Solidarity Federation were certainly among those celebrating. Unfortunately the jubilation at her death all too often descended into sectarianism in the north - a figure despised by so many could have provided a focus for much working class celebration.
The ‘Iron Lady’s’ record in power saw working class communities crushed, the miners not least among them, millions were thrown on the dole, in the north her policies amounted to nothing more than pouring petrol on the flames of the conflict.