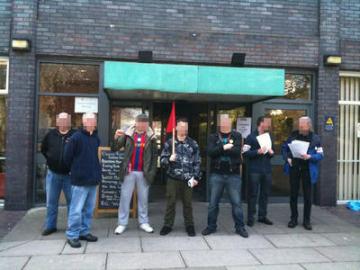 It is now a near certainty that we will see coordinated public sector strike action within the next couple of months. Solidarity Federation - which has members in the public sector unions which will be striking - stands in support of all workers acting to defend their jobs and the services those jobs provide to working class people.

UCU have already balloted. PCS is putting an emergency motion to its conference in May. The NUT sought permission to ballot at its recent conference. Even the moderate ATL already has a mandate to ask members for strike action. The only question now is how events unfold once the ball gets rolling.

The significance of such action shouldn’t be understated. Up to 800,000 people could be out on strike if the action goes ahead, more than official estimates of the TUC’s March for the Alternative. That this action is economic, rather than a simple A to B march, also means that the action will have an exponentially greater effect upon the government, without us having to listen to speeches by the likes of Ed Miliband.

But we ought to be honest about the limitations of this action. There is a tendency on the left to overplay the value of one-day strike action, and this instance is no different.

Less than a third of workplaces are covered by collective bargaining agreements and less than a quarter of workers are in a trade union. The unemployed, a demographic which is growing in the wake of the ruling class’s austerity agenda, cannot take traditional strike action. Yet it would be wrong to say that these groups have no economic power, or that they must play a secondary role in class struggle. To marginalise these groups is to guarantee failure.

To fight the cuts effectively we need to recognise the value of other forms of direct action beyond traditional walk-outs. Economic blockades can have the same effect as a strike. Occupations are a useful weapon against closures. Not to mention the numerous forms of disruptive action that workers can take without having to sacrifice a day’s pay – from go-slows to sabotage.

It is important not to see action in the public sector as some kind of substitute for broader class action. There must be a more explicit effort to connect the struggles of various groups, for example the claimants who face being chucked off benefits by Atos Healthcare and Jobcentre workers who recently struck over an increasingly repressive targets culture. Greater coordination of action is also a must. Not just between different groups of strikers but also between different forms of direct action.

In building for these coordinated strikes, we would emphasise this point. They are not occurring in isolation, but within a broader climate of class struggle. With the PCS and NUT ballots both for discontinuous action, allowing them to call further strikes without having to re-ballot, the link between struggles should be made even more explicit on future walkouts.

We also argue not just for a “yes” vote by members but also for mass attendance of picket lines and strike rallies. But this is not about mobilising the rank-and-file simply to be led. We argue for workers to organise on a horizontal basis, and for a willingness to go beyond the limitations of the trade union leaderships. Whilst the left will be concentrating its efforts on attempting to build militancy in the leadership, how the struggle turns out will really depend on what we can build at the grassroots.

This means not just mass militancy, but locally-controlled strike funds and strong solidarity across workplaces and communities. It also means a recognition of the fundamental nature of bureaucracy and top-down organisation.

A bureaucracy has interests apart from those it is supposed to represent. In the case of trade unions, this means being of value as a mediator between labour and capital. Indeed, the value of this role has long been recognised by the bosses, who have on numerous occasions used union leaders as a way to police the workforce. Changing the faces behind the union may change the degree to which this happens, but it will still happen. The problem is not in the specific figures at the top, but in the structure.

Solidarity Federation recognise that reform of trade unions is akin to alchemy. Instead, we argue for workers to take control of our own struggles. It is now more important than ever that this principle is put into practice.

This article was published on 8 May 2011 by the SolFed group in Liverpool. Other recent articles: