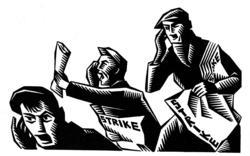 Last night, Saturday the 21st of May, saw upwards of thirty people attend a public meeting on the upcoming June 30th education and civil service strikes.

Hosted by the North London Solidarity Federation, the meeting was very practically focused. Attendees talked about their particular workplace or uni situation and highlighted strategies and tactics which have helped them to organize at work and/or begin talking to their co-workers or fellow students about June 30th and why they shouldn't cross picket lines. When individuals had experienced troubles galvanising their workmates, others at the meeting were glad to help them strategise about what sort of practical steps they could take to begin those conversations. Finally, we discussed what sorts of momentum-building actions could be undertaken in the run-up to June 30th that will ensure education workers and students are not only aware of the issues but feel empowered and confident enough take strike action.

Groups and universities across London were well-represented. We had quite a strong contingent from LSE, folks who had experience at Goldsmith's, and even someone from Kent. SolFedders were present, obviously, but joined by IWWs, the Commune, the Communist Workers Organisation, World Revolution, and lots of radical students who'd been active in the anti-fees movement of last Autumn. The atmosphere was relaxed and comradely and after the talk was done, many stuck around for a pint or two.

Practically, literature was handed and it looks like they'll be an education workers/student organiser training in London before June 30th. It also looks like we'll be producing a leaflet designed for students (including high school students and sixth-formers) to hand out encouraging their coursemates to strike alongside workers on the 30th. Folks were also keen to attend Monday's upcoming assembly on the June 30th strikes, bringing the practical suggestions we had to a larger group and disseminating those discussions across the London radical scene.

All Out for June 30th leaflet: http://solfed.org.uk/?q=all-out-for-june-30th-leaflet-for-edu-workers-parents-and-students

This article was published on 22 May 2011 by the SolFed group in North London. Other recent articles: