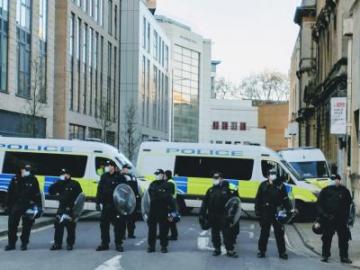 The legislation, which was passed it’s first reading in the house of commons on the 16th march proposes changes to protests in the UK.

Imposing start and finish times for protests, setting noise limits, even more worrying “It will also become a crime to fail to follow restrictions the protesters “ought” to have known about, even if they have not received a direct order from an officer.” (BBC News) – currently police need to be able to prove that protesters knew that they have been told to move on before action can be taken under the pretense of breaking the law.

The protest Bill also seeks to criminalize protests that cause “public nuisance” and “serious disruptions” to everyday social life. As the BBC further explained “This is designed to stop people occupying public spaces, hanging off bridges, gluing themselves to windows, or employing other protest tactics to make themselves both seen and heard”.

Another aspect of this Bill is how it intends to make damage to memorials, such as the Colston Statue in Bristol, punishable by up to 10 years in prison. This is a flagrant attack on our democracy and stems from right wing reactionary ideology, an ideology which would rather see refugees and migrants sent to prison or exiled, rather the smooth functioning of the capitalist economy, unencumbered by strikes, boycotts and pickets, than the consolidation of the most basic democratic rights our supposedly ‘liberal’ social order is supposed to maintain.

There is also an important element of racism in this bill, which is less well known. It will criminalise Roma, Gypsy and Traveller people who live on land without permission, imposing harsh penalties on those with nowhere else to go. After banning their traditional way of life many years ago, governments have been promising “authorised” encampments for decades and failing to deliver every time. There are nowhere near enough “authorised” sites available. Those who buy their own land to live on are denied permission by a racist planning system that blocks almost every site.

As a result, large numbers of people are forced to move from place to place, constantly evicted by bailiffs and police. This has continued during the height of the pandemic, with police encouraged to evict sites by the government. By turning trespass into a criminal matter, the new law amounts to ethnic cleansing. Vehicles will be confiscated, and families broken up when parents are arrested. We are in the midst of a housing crisis, but the government is intent on forcing people into bricks-and-mortar living! They are intent on wiping out traveller sites by making it impossible for people to live their lives.

As well as violent evictions, GRT people already face rampant discrimination. From death threats and property damage to bans from pubs and campsites. This racism is rarely reported, mostly because people do not believe the police will act. We have seen police and politicians howl with rage when it comes to violence against police and graffiti on statues. But where was the outrage last year, when police attacked a pregnant Romany Gypsy woman? (source: travellerstimes.org.uk/news/2020/09/i-w... Is that not violence? Where is the national outcry, when traveller sites are vandalised by racists? We cannot respect journalists and politicians who condemn self-defence against police, but silently condone violent racism.

The Solidarity Federation sees this as exactly what it is: a shameful attack on democratic rights that is designed to silence opposition groups, organizations and trade unions. This is an attack on left and democratic forces in the country, the Bill came about after a year of BLM protests, environmental groups ranging from the reformist Extinction Rebellion to the radical ‘GAF’ (Green Anti-Capitalist Front) and other non-violent direct action based protests. These protests used a wide array of legal, non-violent and collective methods to awaken the public and government to the abuses of power, corruption, exploitation and oppressive government policies that seek to maintain the capitalist power-structures that currently exist.

This will have wide-reaching implications for the future of social movements across the United Kingdom, the Bill is designed not with the violent far-right in mind, whom have always been treated as allies to our government and certainly the police who often support them, but is designed to stop anti-capitalist, anti-racist, feminist, ecological and pro-democracy protests and campaigners. This government fears collective action undertaken by the people it rules, it knows that in the past it was collective action in the form of protests (such as the Poll Tax protests in 1990) and trade union action (such as the Ted Heath government’s failure to reach an agreement with the NUM in 1974) that brought down right-wing governments as democratic actions allows the public to see the failures of the ruling class and their social order. The social order that first and foremost defends the ruling class and the reactionary, racist ideologues who support them most fervently.

This legislation shows the naked face of the interests of the capitalist state and the lie of ‘liberal democracy’ – a system that shows time and time again that it is neither liberal, nor democratic, a system that is merely a democracy for the rich. What is alarming about this Bill is that it will essentially boil down our democratic rights to totally ineffective, performative, symbolic protests and electing officials every couple of years, the opposition parties and social movements tied to them will be as ineffective as they are currently with the neoliberals that dominate our parliament, any real action, individually or collectively by a real opposition group or figure will be muffled, side-lined, ridiculed and most likely, arrested.

For those who have studied political history, or at least the history of the 20th century in some detail will note that right-wing nationalist, fascist and dictatorial regimes will often start their expansive grasp on power through more ‘moderate’ attacks on democracy, before campaigns, legalistic and violent, that silence opposition forces, imprison or kill them. We could be seeing the beginning of the slide into quasi-dictatorship such as that in Turkey where the AKP ruling party essentially rules as a one-party state and any real opposition forces, such as the pro-Kurdish HDP, have their leaders, members and protests imprisoned or made illegal under ‘security concerns’ or the ‘unity of the nation’. There is always an excuse, often an emotional one, that right wing power-hungry sociopaths like Priti Patel, Boris Johnson, Erdogan or even Pinochet will use to manipulate the population into believing this is for their benefit, but eventually there will be nobody left to speak on the behalf of the exploited & oppressed, because dissenting voices have been disqualified from public-democratic participation.

This is not a country with a violent oppositional force, there is widespread violence top-down – from the racist and sexist police force, from bailiffs and landlords, from the managerial class and the far-right whom are the greatest growing terrorist threat in the UK. The ruling class and its allies hold the monopoly on violence and they always have in this country, they now seek to effectively destroy any non-violent opposition to their power, as the history of power-struggles show, those who give the oppressed no chance to peacefully strike, demonstrate and struggle for better conditions, rights and representation of issues will eventually be faced with non-peaceful, violent struggles. Pushing oppositional forces into a situation where they cannot play by the rules and gain anything other than repressive measures thrown at them is foolish on the side of the government, but also points to the lack of fear they have of the left wing in this country, the government is so arrogant and drunk on power that they believe they can get this Bill passed through not just parliament, but the masses of people it rules, with no effective struggle against it.

But we believe in the vigilance, determination and dignity of the people in this country, we are better than this, better than the greedy, intolerant bigots that rule us, stronger and more united against the racist market-dictatorship they wish to impose on us. The Solidarity Federation supports all struggles everywhere that seek to bring about more equality, autonomy, self-determination and freedom for all people, just as with the anti-fascist principles of opposing fascism by any means necessary, as anarchists we believe in opposing the forces of dictatorship by any means necessary, we hope to build a better world that liberates all – that cannot happen with this profoundly right wing and anti-democratic Bill, there will need to be a mass mobilization of people, many of whom may have to sacrifice individually in solidarity with the collective, whom will stop at nothing to defeat this governments draconian Bill, when we are able to mobilize thousands, if not millions against this legislation then this shows that we can truly mobilize against all issues of oppression and exploitation.

This is the last attack on our rights that they will get away with, we must be resolutely united against this vicious attack on democracy, an attack which also has the potential to destroy all other gains that working class people have made in this country.

This article was published on 29 March 2021 by the SolFed group in Bristol. Other recent articles: