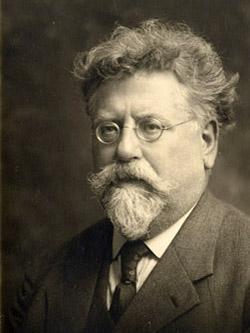 Heiner M. Becker, historian and private scholar, living in Nordwalde, has actually initiated a preliminary investigation by the public prosecution against the internet publishing of at least one work of the famous anarchosyndicalist, Rudolf Rocker (1873 – 1958).

Rudolf Rocker is one of the most famous protagonists of historical anarchosyndicalism. He was secretary of the International Workers Association (IWA) and of the Free Workers Union, Germany (FAUD), in whose historical tradition the FAU sees itself. As an anarchosyndicalist activist, he published many articles, brochures and other texts for this fierce grassroots union movement, including texts such as the ”Principles of Revolutionary Syndicalism“, “Anarchism and Syndicalism“ and  “Anarchosyndicalism“.

Rocker's works have been translated and spread in all different languages for years. It is a solid part of a global movement which fights for economical and political liberation from the yoke of capital and state. Never before did anybody try to claim the rights to exploit Rocker's propaganda texts, neither during his life nor after his death. Just thinking of it would have caused astonishment and incomprehension.

Heiner M. Becker was a profiteer from the anarchosyndicalist movement's wish to spread Rocker's texts as far as possible. When he published Rocker's main work, “Nationalism and Culture“, an ex-FAU member lent him 20.000DM (~10.000€). Other members of the FAU supported him technically, supporting a series of titles by his company, Thélème, which hasn't published anything for years.

Heiner M. Becker has many reasons to be thankful to the anarchosyndicalist movement's support. But what he did, he paid the credit back right now, after 15 years, after several dunning letters and without paying interest on it. But something else outweighs that. He thanks FAU for support by claiming bourgeois ownership rights of Rocker's works and even mobilizes the police and criminal justice system to execute them.

Against this background, the FAU Congress  declares unmistakably, that we – and our sister unions in the IWA and others – believe Rocker's texts are the common property of all who fight against capitalist exploitation and state repression for a free and self-organized economic and social world. We call upon Heiner M. Becker to assume responsibility and waive all bourgeois property rights to Rudolf Rocker's and Milly Wittkop-Rocker's works and publish it under a Creative Commons Licence. As for the prosecutions going on, we demand they stop immediately.