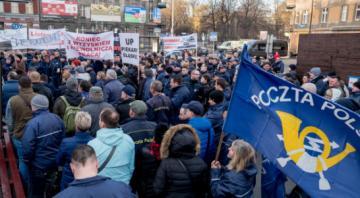 A campaign for better pay and working conditions by Polish postal workers supported by the ZSP-IWA union is facing increasing repression. Following nation-wide protests, the government-owned postal office have sought to silence protesting workers and fired several of the organisers. In addition, they have brought a series of bogus criminal cases against members of our sister union, the ZSP-IWA, who have supported the self-organised campaign of postal workers. SolFed-IWA is in solidarity with postal workers in Poland. Stop state repression of workers now! An injury to one is an injury to all!

For almost two years, postal workers around Poland have been protesting for better working conditions. The anarcho-syndiclaist union ZSP has been active in attempts to coordinate national networks, actions and to unionize workers, together with hundreds of other workers spread around the country. All of the workers shared two things in common: they are fed up with the very poor working conditions and were not satisfied with the role of the representative unions which signed very agreements on their behalf with the employer.

The working conditions at the post office are awful, especially for mail carriers. Wages hover just slightly above minimum wage, meaning the basic  take-home pay is a around 350 euros (~£310). Many mail carriers who have worked 15, 20 or even 30 years earn basically the same. What's worse is that the conditions are hard and most are overworked. With wages at supermarkets now being even 1000 zloties (£210) higher, it is very hard to find new people to work there. It is probably for this reason that the government has decided to use prison labor to make up for the shortage.

This work was immediately attacked by representatives both of Solidarność (the main union recognised by the Post Office) and by the management of the Post Office, which is a state-owned enterprise. Solidarność at the Post Office carried out a vile disinformation campaign, which sought to present the ZSP as if it was a Soviet paramilitary organization – such a grotesque misrepresentation that it would have been hilarious if it weren't such a part of the current far-right political hysteria.

When workers began to organize and call for protests on a national level, demanding a significant pay rise and better working conditions, the management of the Post Office, together with their union servants, started a campaign of harrassment and threats against the workers. Throughout Poland, workers were visited, told that the protests were illegal, threatened with disciplinary action, etc.

Finally, after last years' large national protests, Klaudiusz and Rafal were fired and now Zbyszek. He had been active after the protests in trying to organize workers.

Besides this retaliation against the postal workers, there have also been various attempts to bring criminal cases against another member of ZSP from Warsaw, Jakub. The Post Office tried (unsuccessfully) to have him prosecuted under the amazing charge of „organizing a bloody revolution”. Although this was so stupid it was ludicrous, it is actually a very serious charge, completely out of line with the real crime – helping to coordinate the national workers protest. Unfortunately the Post Office, backed by the State, is trying to prosecute on lesser criminal charges, which are also complete nonsense.

Although the ZSP has born the brunt of the repression, it is important to recognize that in fact, this is a campaign of state repression against all workers.

SolFed-IWA demands that the Polish state stop repression of workers now! In solidarity with postal workers in Poland, we are calling for the following protests: