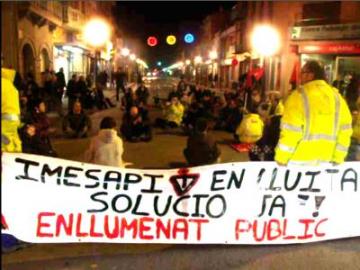 Crucially, all of the workers at the Granollers plant belong to either the CNT or CGT unions, who have vowed to back the strike as long as it continues, unlike the mainstream Comisiones Obreras union,who signed off on similar redundancy packages at IMESAPI plants in Barcelona (which saw a failed strike) and Tenerife.

Despite now finding themselves alone in their struggle, the IMESAPI strikers have been industrious: holding twice-weekly family demonstrations marching through the town to the town hall.  The strikers' march through the town centre on 22 December was a cold bucket of water for shoppers on possibly the most important commercial day of the year. As their children - at the demonstration's head with a banner that said: “FLORENTINO PEREZ, WHAT ABOUT OUR TOYS?” - filed past over the umpteen Nativity scenes and kitsch Christmas decorations, one could sense an evident contrast between the absurd myth of Christmas plenitude perpetuated by town councils and retail, and the real sense of festive lack being endured by many in crisis-hit Spain.

Indeed, workers on the demonstration spoke of a lean Christmas, while many were worrying about their next mortgage payment. A further blow has been the cynicism of IMEPASI, who still haven't paid their workers their annual Christmas bonus, despite repeatedly promising to do so.  They have also refused to open their books to the unions, who suspect financial irregularities on the part of their employers and claim that the new redundancy measures would make the remaining workers' jobs impossible.

The strike and occupation continues and you can keep track of it on Facebook (in Catalan/Spanish): http://www.facebook.com/ImesapiGranollersEnHuelga