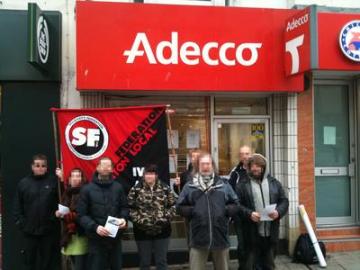 There was a great turnout for the short-notice picket of employment agency Adecco in Brighton today. Around 20 people stopped by, with picket numbers averaging 10-15 for the two hour picket. A division of Adecco has been hiring strike-breakers for the multinational corporation ABB and their contractor EULEN in Cordoba, Spain, where workers have been on indefiniate strike since November 28th. Around 400 copies of this leaflet were handed out. There were also pickets in Glasgow and London.

The picket was well attended at only a few days notice, and we had some great conversations with supportive members of the public, including some Spanish teenagers who were familiar with the CNT and eager to help. Adecco locked their doors and called the police, but the police simply checked we were not physically blocking access and then left the picket alone. Only a handful of people went in, at least one of whom had taken a leaflet and went in to complain. Many thanks to everyone for their support!

The background to the dispute is as follows. The sacked workers, some of whom are members of the CNT union, were told they were to be made redundant and replaced with non-union workers. They responded by going on strike, and have been camped outside the factory ever since. The employers ABB-EULEN responded by sacking the strikers, and Adecco subsidiary Eurocen has been helping by providing temps to scab on the strike (to do the work of the strikers in an attempt to undermine the strike).

The CNT union points out that the problems related to the work in ABB are also related to outsourcing and casualisation in general. The workers who were employed through the contractor EULEN in fact worked for ABB and took orders from them, but they have a much lower salary and worse working conditions than regular ABB workers and ABB took no responsibility for them as an employer. There were serious breaches of health and safety and inadequate equipment provided. There is also the fact that the relevant collective agreements for the work they perform were not applied. Management's refusal to address these issues was also a factor leading to the strike.

By continuing to provide strikebreakers, Adecco is complicit in ABB's continued union repression at the factory where there have been a number of union victories over the last 2 years. The workers of the Cordoba factory in Spain are demanding what all workers deserve: fair pay, respect on the job, and a safe working environment. Austerity is providing employers in the public and private sectors alike with the excuse to attack our pay and working conditions. We must stand together—across borders, industries and trade unions—and fight back.

Employment agencies have exploited us long enough. A win for workers at ABB, a giant multinational that operates in over 100 countries, will not only improve working conditions for Spanish workers, it will let employment agencies like ADECCO know that workers are willing to fight back against their unscrupulous practices.
We demand that sacked strikers are re-instated, management talks with the workforce, and that ADECCO stop providing scab labour.

This article was published on 20 January 2012 by the SolFed group in Brighton. Other recent articles: