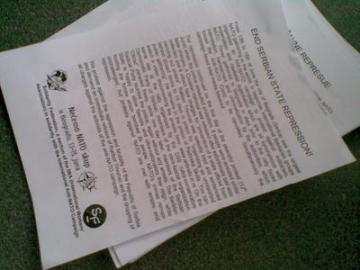 Monday, 20th June, 10.00 - 12.00
PROTEST IN FRONT OF THE SERBIAN EMBASSY, LONDON
called by Solidarity Federation in solidarity with the International Anti-NATO Campaign.
Text of leaflet:
From 13th to 15th of June the city of Belgrade (Serbia) saw the largest NATO gathering in the world. In response, international libertarian groups organized an Anti-NATO campaign to protest against militarism, imperialism and capitalist exploitation which are all synonymous with NATO. Those gathered in Belgrade in days prior to the rally faced intimidation, harassment and criminalization by the authorities, which forced the Anti-NATO Camp to be cancelled. Simultaneously the campaign faced total media blackout.
The repression continued on the first day of the peaceful protest (12th June) when the police assaulted protestors. 8 people were arrested under false charges. A Croatian national was released after extortionate bail was collected and 6 others face charges for “prevention of a state official from carrying out orders”. Ratibor Trivunac was speedily tried and sentenced behind closed doors to 15 days in prison for “organizing an unreported public gathering”. He remains in the prison of Padinska Skela. You can watch a video documenting the arrests here: www.antinato.in.rs On the same day at the rally organized by the DSS (ultra-conservative Democratic Party of Serbia), members of the clero-fascist organization “Obraz” paraded freely, while one day later, members of the Serbian Radical Party taunted the police, again without any arrests. The Serbian State is happy to allow fascists and ultra-nationalists free reign, while hosting the forces which bombed its people. NATO’s crimes remain unchallenged, but protests against NATO are met with arrests and repression.
We protest against the repression and brutality of the Republic of Serbia and demand an immediate release of Ratibor Trivunac and the dropping of all charges against the activists of the anti-NATO campaign.