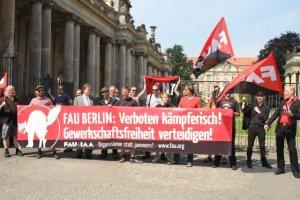 The court emphasized how weak the plaintiff’s arguments were. The Babylon Mitte cinema management, where the employees and the FAU have been waging an effective labor struggle since last year, insisted on their point of view: The FAU Berlin is only aloud to call itself a union, if it has proven it has the capacity to conclude collective agreements. This refers to Berlin’s Labor Court decision to grant an injunction to Babylon’s management banning a boycott call made by the FAU Berlin. That judge justified his decision by saying the FAU Berlin isn’t what case law traditionally considers a union with the capacity to conclude collective agreements. Only such union are legally allowed to take job action, i.e. call for boycotts.

Using the exact same argument, the plaintiff was able to get the FAU Berlin banned from calling itself a union in Berlin’s Lower Court. This was not only a nuisance that led to an expensive run through the courts, it was also a hindrance to the union’s work. Being a union comes with certain rights, which the FAU Berlin could no longer make use of. Not only in the cinema but in all labor disputes its members are involved in.

Berlin’s Higher Court says that there is no actual, objective criteria for the right to use the term union. If the plaintiff puts the capacity to conclude collective agreements into play, this is their personal interpretation of the law. And anyway, in light of freedom of speech, anyone can call themselves what they want. Furthermore, the cause of the injunction was not deemed proven. The cinema management, who had refused to negotiate with the FAU, had claimed that it was financially harmed because the FAU had said it is a union. According to the court this was too constructed to justify an injunction.

After the court case, there was a manifestation in front of the courthouse. Hector Feliciano of the Spanish CNT-IWA and André Eisenstein of the French CNT, who both attended as trial observers, congratulated the FAU Berlin on their judicial victory. “A union is more than a piece of paper; it exists in our hearts, heads, and our actions,” said Laure Akai of the Polish ZSP-IWA to the gathering. Klaus Stähle, the lawyer who had defended the FAU in this case, made clear what the court meant with its ruling: “The Babylon Cinema has to live with the fact that you are a union!” The crowd then moved on to a spontaneously demonstration—this time in front of the cinema. Chants like “FAU-IWA, the union, is here to stay” were chanted through the window of Babylon Manager Timothy Grossman.

June 10th was a great day for workers’ rights. The “Emmily” case was also heard by the Federal Lab our Court. Both the Emmily committee and the FAU held a demonstration together in front of a Kaiser’s supermarket. The labor activist, Emmily, had worked in Kaiser’s before being fired after her boss claimed she had stolen a bottle deposit coupon worth 1.30 Euro. She won her trial as well. Two reasons to celebrate for both groups, who had supported each other in the runup to the trials.

In the evening, the international guests came together in the FAU’s offices where there was a panel discussion related to union work. The overall premise was that the different countries have had different histories, but in reaction to the financial crisis all of the governments have plans relating to cutting labor rights in reserve. It could be seen that in every country–to a different extent and in different ways–centralize unions are favored for their role as guardians of the establishment. At the same time small militant unions have had their rights curtailed. The duty of the syndicalist movement in Europe has to be to counteract this and to strengthen the rights of workers.

This ruling’s meaning goes beyond the cinema. Germany has very fixed union structures and the centralized union wants to see its monopoly expanded. There is no room for self-organized, grassroots groups here. Whoever wants to change this situation will face serious headwind. That’s why the de-facto ban on the FAU Berlin was a serious precedence, which was an attack on union freedoms in general.

The day also saw international protests. In Philadelphia and Amsterdam, there were simultaneous pickets targeting German consuls. A few days earlier, Lithuanian union member demonstrated in front of the Germany Embassy in Vilnius. Demonstrators could be heard chanting: “The ban is an attack on workers in Germany and we won’t let it stand.” “This is how capitalist try to break the labor movement’s back.” Letters of solidarity were received by the FAU over the last weeks from countries around the world.

For the FAU Berlin, the ruling means that a long period of intense activity is coming to an end. They are very delighted about all the support they have gotten–for example, from the Solidarity Committee which gathered countless signatures contesting the de-facto ban. Financial support through donations was also an important factor. As opposed to the government-funded cinema, which lets its court costs be paid by tax dollars, the FAU does not receive any support from the government. The many letters, protest actions, and manifestations that occurred both nationally and internationally, were a decisive factor in this struggle.

The injunction banning the FAU Berlin from calling for a boycott of the cinema was not rescinded. As long as the question of the FAU Berlin’s capacity to conclude collective agreements has not been clarified, it will be difficult for the FAU local in the cinema to make good their demands. Lars Röhm, secretary of the FAU Berlin: “We can now call ourselves a union again, but we’ll still have to fight for the rights other unions take for granted.”

The FAU Berlin will have ample opportunity to do this–their membership has been growing steadily. A handful of locals are in the process of forming in different industries from health care to sanitary. And there’s even another cinema.

This article was published on 13 June 2010 by the SolFed group in Brighton. Other recent articles: