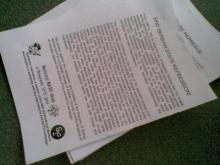 Across the world, other sections of the International Workers Association have been fighting state attempts to repress workers organisation.
In Serbia, in a dramatic turn, six Serbian activists, known as the Belgrade Six (for more details, see Catalyst #22 - available at http:// www.solfed.org.uk/docs/catalyst), were released on bail on the first day of their trial on February 17th. 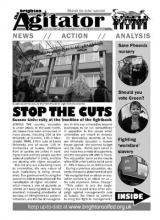 Statement the Serbian Anarcho-syndicalist group ASI presented to the
International Workers Association Congress in 2009 on the states
attempts to fit up six anarchists.

Six anarchists from the ASI, Solidarity Federation’s Serbian sister organisation are currently imprisoned by the Serbian state.  Tadej Kurep, Ivan Vulovic, Sanja Dojkic, Ratibor Trivunac, Ivan Savic and Nikola Mitrovic are accused of  attacking the Greek embassy in Belgrade remain imprisoned, with (at time of press) no charges yet levelled at them.