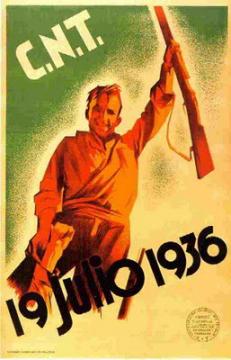 This 19th of July is the 75 anniversary of the 1936 Spanish Revolution. 75 years since that Summer when the workers took to the streets, not just to defend themselves from the coup d’etat started by the fascists, but also to fight for their future, where they saw a different society based on equality, solidarity and mutual support. Despite the time elapsed between then and now we can point out two similarities and one fundamental difference.

Today, as then, the government remains a puppet of the interests of the powerful. In July ‘36, the Republican Government refused to give weapons to the workers for self-defense, although aware of the gravity of the coup; showing that its fear of regular armed people was bigger than its fear of fascists. Today the socialists, like ridiculous apprentices of Machiavelli, give in to the blackmail of financial power, and legislate to exploit and further impoverish the workers. Then as now, Governments are not listening to those people they represent so unworthily.

In summer of ‘36 unemployment rates were very high, many companies were closed, wages were miserable and many people starved, something we are going to see again. Capitalism, joined to its natural appendices, the Army (to control the body) and the Church (to control the mind), saw in the workers’ organisation a clear menace to their interests, so Army and Church were used to massacre them. Today the capitalists are not called fascists, they are “the market”, and although the disappointed and quiet working class is not a threat, they push to cut salaries and rights, or eliminate the most basic public services to guarantee their future benefits. Their armies are shareholders and their pulpits the media (dis)information. Speculating on stocks they condemn to death or poverty millions of people across the World or ruin entire countries. Now as then, indifferent to suffering and needs, they spread exploitation and insecurity in order to maintain their privileges.

In the other hand, the primary difference from those times is the conciousness of the working class. Despite many years of repression and hardship, the workers of 1936 were organized. Labour unions were full of members and also full of dreams. Male and female workers did not join the Unions only for economic benefits, but also demanded another way of life, a different economy, another kind of relationship with each other. Getting out of poverty, not only materially, but also spiritually. In fact they suceeded. In the midst of a war against a professional army, the workers not only confronted those forces, they also realised their aspirations through the collectivisation of the means of production that took place after that 19th of July; this remains to this day a unique example in World History.

Today, the CNT is not just fighting against capital and the State, but also against the passivity of the workers. The working class of the 21st century struggles between fear and disorientation, unable to make sense of association, unable to see further than the day in hand. Individualism, as the tool of power, still rules. Many workers admire their exploitative bosses, justify their aggression and dream of imitating them to escape their misery.

Breaking up this situation is the most important job for the CNT militants. Making our union a place where workers learn solidarity and mutual support as the first step to building an alternative to this unfair and non-sensical society. A place to connect the spirit of those who fought on the 19th July with those today that are having the same problems with the same enemies. To show anarcho-syndicalism as a way to improve not only their lives but also their personal and collective ethics. To find this new world that we carry in our hearts.

Despite all the means of control, again society fills up the streets and squares; therefore, today as in the past, we continue our work without giving an inch on the theory or practice, confident that perseverance and loyal and honest work will raise the awareness of the working class and will help the spirit of the people to be reborn.