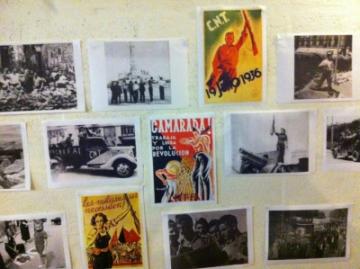 A member of the Liverpool local read out the following statement:

"Thanks to everyone for coming today. We’re holding this social night to remember and celebrate the events of 1936 when Fascism suffered its first major defeats in parts of Spain, most notably on the streets of Barcelona. The civil war is often depicted as a straight-forward battle between republican democrats and nationalist rebels. What is often overlooked by historians is the huge contribution of the libertarian working-class movement, and in particularly the members of the anarcho-syndicalist CNT trade union.

As well as stopping the uprising in its tracks, the working-class districts and radical trade unions set in motion one of the most far-reaching, albeit short-lived, social revolutions in human history.

Now we make no bones about the fact that massive mistakes were made and lessons need to be learnt: never should anarchists give up our principles to join government bodies in the name of anti-fascist unity. But we believe the revolution gave us a glimpse of what can be achieved when we as workers take matters into our own hands.

Today we see the miners of the Asturias region in Spain keeping alive the spirit of militant direct action. Part of the money we raise tonight will be donated to their struggle. Their struggle is our struggle. The only way we can achieve freedom and equality is by following their example and waging war against capitalism and the state."

An appeal was then made for as many people as possible to attend the annual James Larkin march the following day, to oppose the fascists who had pledged to oppose it on the streets.

Report from a similar event held by CNT Barcelona here.

This article was published on 23 July 2012 by the SolFed group in Liverpool. Other recent articles: