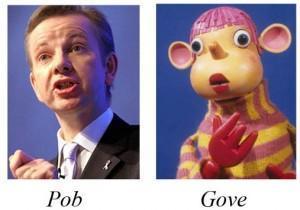 (Un)Qualified teachers wanted.
While the eyes of most people, both critical and uncritical, are drawn to the Olympics, secretary of state for Education, Michael Gove, has introduced possibly his most significant and destructive piece of reform.

Academies no longer need to employ qualified teachers to teach lessons. Gove heralds this as 'freedom' for academies to employ 'the best for the job'. So while trying to raise the profile of teaching, he's doing the exact opposite. But this is a smokescreen. This is nothing to do with profile, or improving education, or getting 'the best for the job'. It has everything to do with driving down pay and conditions.

Make no mistake, a qualification does not make you a 'good' teacher, and the governments yardsticks for 'good' are questionable at best., I have no faith in such judgements or the Ofsted framework. Likewise, there are people without a piece of paper saying 'IZ REAL TEACHER' who would probably be great with kids. But this is all a side issue. This reform is entirely about destroying national agreements over pay and conditions which teachers in state schools were entitled to.

It's important to mention that this sort of thing is happening elsewhere. RMT members are currently not undertaking duties outside their job description and refusing to operate stations being staffed by untrained temp Customer Service Assistants (ICSAs) - trains aren't to stop at stations where these ICSAs are being used to top up under-staffing on the cheap. Underground staff feel the unqualified staff not only undermine pay and conditions but pose health and safety concerns.

Similar concerns are relevant in the classroom. We don't just teach history, music, science whatever, we are also responsible for every single pupil in a classroom during lesson time, and are 'trained' to deal with a wide variety of circumstances, training that is supposed to be developed regularly, but sure they won't even pay for that either.

Pay & conditions
Now, academies have always had the freedom to deviate from the national pay scale, but in practice they haven't. This is because they were still required to employ qualified teachers - those possessing Qualified Teacher Status, or QTS. This status is conferred to those with qualifications such as PGCE, GTP or Teach First, amongst a few others. Now,because they were employing qualified teachers, in a 'job market' even in a recession, it's hard to get and retain staff if you don't pay 'the going rate' - and the going rate in this case is the national pay scale in state schools.

But, along came Gove to remedy this pesky barrier to profiteering. Academies no longer have to employ qualified teachers, opening the pool of desperate workers who fancy a go at teaching. More prospective 'teachers', more job competition, more desperation, lower wages, worse conditions. Those that chose to work as non-qualified teachers will almost certainly be getting shafted, probably earning 8-10k a year less than a 'qualified' teacher - so no one is a winner here except academy sponsors.

Profiteering
Academies can make profits, Gove has no problem with this, But how is profit made in a sector without paying 'customers'?

Academies receive their funding direct from Whitehall, rather than their local authority. This will be a fixed amount. They can then 'buy in' their services. So by buying in services in a 'competitive' market they can 'save' money. Likewise they can save money by now paying unqualified staff to teach lessons. Any surplus generated is ££PROFIT££. Who gets this profit? It gets put back into the school right? DOES IT FUCK. The sponsors rake it in.

It makes sense why carpet sellers are taking over schools like Downhills Primary in Tottenham against the wishes of workers, pupils and parents. Because there's money to be made. Makes even more sense to start running chains like ARK, AET, and Harris.

This all had it's faults, absolutely, but there was room for asking questions like 'are schools the right thing to do?', 'are uniforms a good idea?'. The move to 'on the job' training all but removes what was left of this, and turns teaching into service-delivery, manufacturing the next generation of menially-skilled workplace fodder.

The tensions are obvious. This move further proletarianises teaching, eroding the myth of 'professionalism' that many had bought into. Such 'professionalism' while helping win recognition for teaching and securing better pay and conditions, by attempting to put teaching on par with other 'professions', also resulted in a somewhat more conservative current within teaching. It's not a PINKO LEFTY profession. You won't find jaded lefties with elbow patches on their jackets. You'll find driven 27 year old ex-City-workers in suits. Those that stay longer than three years are almost certainly careerists with managerial aspirations. In academies, of which there are over 1,700 nationally (compared to less than 300 two years ago), teachers over the age of 30 are a noticeable rarity.

Is this what parents want?
As if Gove cares anyway, but the answer is NO:

- From the NUT: "Our 2011 ComRes poll showed that 89% of parents want a qualified teacher to teach their child, with just 1% comfortable about those without Qualified Teacher Status (QTS) taking charge of a class.

By his own admission, Michael Gove is relaxed about profit-making from schools. He takes his inspiration from Sweden where profits are being made by reducing the number of qualified teachers, and where educational standards have fallen. By contrast, the reason Finland scores so highly in international tables is because they value teachers, trust teachers and pay teachers well.

“Parents and teachers will see this as a cost-cutting measure that will cause irreparable damage to children’s education. Schools need a properly resourced team of qualified teachers and support staff, not lower investment dressed up as ‘freedoms’"

So parents don't want it, workers certainly won't want it, and no one bothers to ask kids anyway. But none of this matters to Gove anyway.

Gove chose a perfect day to introduce this stunning move. While no one is looking. And by the time we wake up it will already be reality.