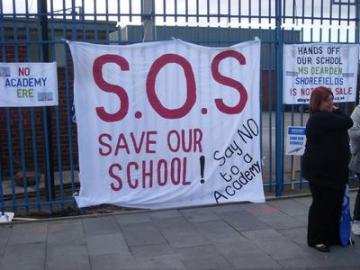 Academies first emerged under Labour, and are part of a broader agenda of privatisation. Becoming an academy puts a school outside of the local authority's control and means that complete control of the school's agenda goes to whoever puts up the cash. This leaves the education of the children at the mercy of private whims and has seen the kind of creationist teachings commonplace in America emerge in Britain, amongst other things. It is a move to increasing top-down control, when what we need is a move towards more open and democratic education in the interests of the pupils themselves rather than vested interests.

Liverpool Solidarity Federation extends its full support to the campaign to stop Shorefields becoming an academy. But we also favour a broader fight as ultimately all schools are under threat from plans to corporatise education. An injury to one is an injury to all!

This article was published on 11 May 2011 by the SolFed group in Liverpool. Other recent articles: