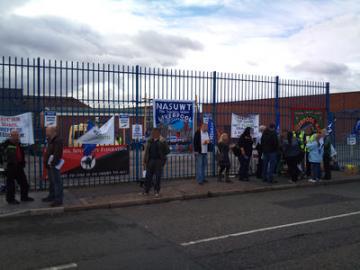 During the picket, members of Liverpool Solfed handed out the latest edition of our free newsletter, Wildcat, and the Education Workers' Network leaflet, All Out For June 30th, about next week's national strikes.

The gathering wrapped up with local union reps addressing the crowd, along with several guest speakers. The Trades Council offered its support, as well as inviting those assembled to a meeting on 13 July to establish a Liverpool Against the Cuts group. One of the reps also read out a statement from an anonymous teacher at a school which had already become an academy - offering a sense of foreboding about broken promises and unacceptable conditions.

The only sour note was struck by a Labour councillor, who insisted that "we're fighting hard on our end" even whilst being part of a cabinet wilfully doing the work of the government in attacking the working class. When she left the picket line, she was heading to Sure Start Centres to talk to them about the closures that she was helping to implement.

Following the picket, those present re-convened to a nearby church café, where sandwiches and drinks had been laid on for the strikers. There, they held a meeting to discuss the next steps of the campaign, as well as to address the bullying and intimidation suffered by members working at the school. Whilst the local media has been generally supportive of the campaign, the vested interests behind the change in status appear to be getting more openly hostile.

Liverpool Solidarity Federation offers its continuing support and solidarity to the Shorefields campaign. As long as there is a fight to be had, we will be part of it - not just to preserve education as it is, but in the push towards genuinely free and democratic education for all.

This article was published on 21 June 2011 by the SolFed group in Liverpool. Other recent articles: