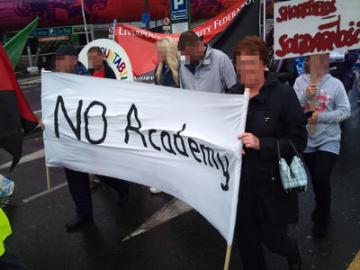 The drive to turn schools into academies - as well as to establish falsely-named "free schools" - is nothing more than the privatisation of education. The state wants to give those with capital the free reign to do as they like in the education, leaving the door open for various forms of indoctrination and abuse, as well as the erosion of terms and conditions for those who work in the schools. Despite being dressed up in libertarian language, there is no "freedom" except for the proprietors who can set up their own unaccountable private tyrannies.

Liverpool Solfed offers its full support to the fight against academies and argues that a more libertarian education system can only come about through the democratisation of the school system and giving pupils a say in how they learn. Michael Gove's proposals offer nothing of the sort, and our solidarity goes to all those protesting and taking direct action against the system he wishes to create.

This article was published on 16 July 2011 by the SolFed group in Liverpool. Other recent articles: