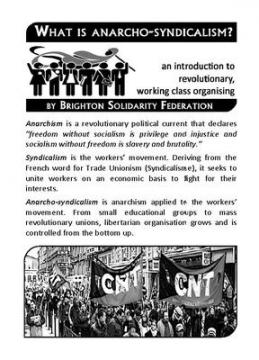 This is a leaflet we produced in August 2009, explaining some basics of anarcho-syndicalism.

If you want a copy, please get in touch with us, or download the attached pdf file.

Anarchism is a revolutionary political current that declares “freedom without socialism is privilege and injustice and socialism without freedom is slavery and brutality.”

Syndicalism is the workers’ movement. Deriving from the French word for Trade Unionism (Syndicalisme), it seeks to unite workers on an economic basis to fight for their interests.

Anarcho-syndicalism is anarchism applied to the workers’ movement. From small educational groups to mass revolutionary unions, libertarian organisation grows and is controlled from the bottom up.

Anarcho-syndicalists seek to organise with other militant workers who agree with their revolutionary aims and principles. Initially, this takes the form of local groups and industrial networks, but as these grow in size and influence they can begin to take on union functions such as advising fellow workers and initiating direct action like work-to-rules, strikes and occupations.

The role of anarcho-syndicalist networks and unions is not to try and recruit every worker, but to advocate and organise mass meetings of all workers which control the struggle. Within these meetings anarcho-syndicalists argue for the principles of solidarity, direct action and self-organisation.

By organising this way, workers learn to act for themselves, exercising their power without being lead by union officials or political vanguards, calling into question the way society is organised and prefiguring the world we want to create, without bosses or rulers.

Anarcho-syndicalists aim to promote solidarity in our workplaces and outside them, encouraging workers to organise independently of government, bosses and bureaucrats to fight for our own interests as a class. Our ultimate goal is a stateless, classless society based on the principle of ‘from each according to ability, to each according to need’ – a system of free councils made up of recallable delegates from workplaces and communities. This is libertarian communism.

We see such a society based on our needs being created out of working class struggles to assert our needs in the here and now. Our activity is therefore aimed at promoting, assisting and developing such class struggles locally and internationally, which both benefits us now and brings us closer to the society we want to create. We do this according to the following three principles:

• Solidarity. As individuals we are relatively powerless in the face of bosses, bureaucrats and the state, but when we act collectively the tables are turned.
• Direct action. We do not make appeals to political or economic representatives to act on our behalf, but organise to get the things we want for ourselves.
• Self-organisation. Workers should control their own struggles through mass meetings, both learning how to act without bosses or leaders and ensuring they can’t be sold out or demobilised from above.

What do anarcho-syndicalists do?

Anarcho-syndicalists are engaged in a wide range of workplace and community struggles, some very immediate and others more long term. These include:

• Workplace organising – on issues from pay to working hours to working practices and conditions.
• Community organising – from public services to housing to the environment.
• Strike and occupation solidarity – staffing picket lines, raising funds and bringing in supplies.
• Worker support – organising demonstrations, pickets and direct action in support of individual victimised workers.
• Networking with other militant workers – for example through the National Shop Stewards Network and the Education Workers’ Network.
• Organising public meetings – on the economy, war, climate change and other issues that affect the working class.
• Producing and distributing propaganda – from regular free-sheets and magazines to one-off leaflets, spreading the ideas of solidarity, direct action and self-organisation.

This article was published on 1 August 2009 by the SolFed group in Brighton. Other recent articles: