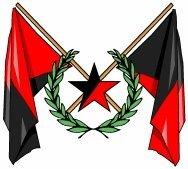 A joint statement released by our Spanish sister section, the CNT, along with several other Spanish unions (leer en español).

The unions Confederación General del Trabajo (CGT), Confederación Nacional del Trabajo (CNT), Solidaridad Obrera (SO) and Coordinadora Sindical de Clase (CSC) met on June 24 in Madrid to discuss how we can respond to the attack we the workers are under, an attack without precedents, one that bushwhacks our acquired rights, one made a reality by the government and European institutions, the bosses and the markets. How we can coordinate a struggle, and a response, based on class unity and action.

All of the unions expressed their complete rejection of the policies that through successive labor reforms, pension system cuts, collective bargaining reforms and cuts in the public services aim to send the hefty IOU to the workers, and the weakest sectors of the society, who then foot the bill for capital's crisis.

We also agreed that a shared response, one that was above our differences, was needed to mobilize the workers in a unified struggle, with the participation of all those union organizations, workers groups and social movements who are firmly against the policy of social pacts and demobilization promoted by the institutional unionism of CCOO and UGT.

We believe we need to work breaking with a union model that in the last 30 years has only brought us continued loss of rights and that this time of a severe crisis of capitalism has demonstrated its complicity and lack of willpower and ability to react to the attacks on the working class. A union model that has promoted an institutionalized unionism that depends on the state whose aim seems to be to prevent the working class' real mobilization and participation in autonomous union organizations that actually want to fight.

The reform of collective bargaining, being debated in congress right now, is a new affront to our rights, one more turn of the screw to make it harder and harder to fight in the workshops and in the community, consolidating institutional bi-unionism and its role as managers of the crisis defending the capitalists' interests, making union organizations' ability to act even hard, and cutting the workers' freedom to organize.

The meeting on June 24 was just the first step in a process that will grow in the coming months to promote mobilization based on common demands, debated and assumed by the workers, with our eyes set on a General Strike that can take on the current offensive and advance towards the conquest of new social rights.

The events sparked by May 15 have burst onto the scene, breaking the climate of passivity that prevailed before, and have pushed us into a scenario of mobilization that needs to move onto the shop floor, pushing workers' economic and social demands into the limelight, giving this movement the tools it needs to confront and fight in the labor and economic terrain, complementing socio-political demands with specific actions against capitalism.

The situation demands an emphatic response from us that underlines the fact that the measures we are suffering as workers mean we must, we must, continue with our union struggles and to definitively break with the model of institutionalized unionism. That it serve as a precedent where the class unions are the ones who mark off the tempo with offensive actions to obtain our goals.