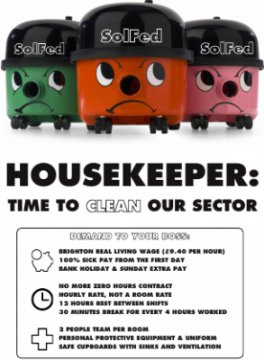 If you regularly follow our activity probably you have realised that the housekeeper campaign is no longer active. This article aims to explain you what we tried to do, what we did and why the campaign is now on hold.

The housekeepers' campaign tried to expose the problems of workers in the tourist industry in Brighton through one of the hardest positions in the sector: those who clean every room in Brighton after a wild party, a family weekend or a romantic night. The idea of the campaign was to generate a discussion around working conditions in hostels, hotels and guest houses.

We made some demands around our daily problems, submitted them to our bosses and shared them with lots of workers in the sector. We know that the situation in Brighton was, and sadly still is, awful for housekeepers. We know that lots of companies pay us per room, don't allow us to have breaks, force us to work literally running, and try to avoid paying us holidays.

But we didn't want just to say to our companies “could you pay me at least the minimum wage, please?”. The campaign wasn't about companies doing illegal things to their workers. The campaign was about naming and shaming an unfair system in which people who clean dozens of luxury rooms every day, sleep every night in a small shared room full of dampness.

Did we achieve that? Probably we generated some discussions. Probably most of the people looked at those posters and thought that is not realistic to ask companies to pay the London Living Wage in Brighton, because probably they think that a room of £264 per night leaves no margin to pay around £10 per hour to a person that is cleaning an average of 3 rooms per hour. But probably other people sympathized with the idea and discussed it with other work-mates.

But, anyway, one way or another, it was worth it. Because for us the campaign was not about gaining lots of members and becoming full-time paid officials. For us the campaign was mainly about saying what we think about our sector, about our job and about our lives. Partly, it was about the cathartic fact of saying: “My job is crap” and honestly in that respect it worked.

Most of the people involved in the campaign were working in a hostel in Old Steine. We had better working conditions than most of the housekeepers in Brighton, why deny it. We didn't have problems with holidays, we had two days off  every week and for some time we were above the minimum wage. But also we were united, so we prevented the company to stop paying us our breaks, forced it to increase the staff and achieved most of the improvements in Health & Safety that we had in our list of demands.

So, why is the campaign now on hold? Because we had to quit our jobs or to leave Brighton. To live in a city like Brighton is no longer sustainable for people earning the minimum wage. Some of us found better paid jobs but others just decided to move out from Brighton.

So now we are in different jobs and in different cities, but we keep saying that our jobs are crap. Because is not cleaning crap what makes your job crap, it's watching other people make a profit from your job which makes it crap. But our campaign around housekeeping in Brighton is only in stand-by mode, waiting for new people to join and say “we have now had it up to here; things can't go on like this”.

Page of the original Housekeepers Campaign

This article was published on 23 December 2016 by the SolFed group in Brighton. Other recent articles: