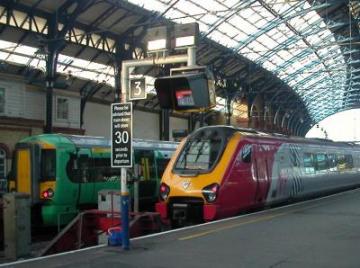 The recent strikes by conductors and train drivers - members of the RMT and ASLEF unions - have been the biggest railway strikes in decades.

As a local, Brighton SolFed has been supporting the local striking members. Our support has been through the attendance of pickets, and organising a benefit gig; to raise money for the local strike fund, and, most importantly, to show solidarity and get workers across industries together.

If you only read media reports, this would seem to be a simple dispute regarding who merely pushes a button to open the train doors.

Really, this is about our safety.

GTR want Driver Operated Only (DOO) trains, and to achieve this they want to get rid of the conductor’s safety critical role.

This means the driver will have to do all the checks alongside what they already do, which will take away their 40-second break before concentrating again whilst driving. Another issue highlighted by the drivers is that they can’t always see all of the train: this can be due to weather, or faulty cameras on the station or train, and yes even human error, which has to be accounted for. This is added pressure and strain to an already stressful job where the last thing anyone wants to do is to hurt anyone.

For the conductor, this is a direct attack on their role, which will mean they are at risk of losing their jobs (they are currently offered only a four year guarantee), and a downgrading of their terms and conditions.

In a recent train crash in Watford, the train driver was incapacitated and it was the conductors who carried out the safety critical roles. This incident emphasises the need for more than one person to look after trains packed full of people.

For the train user it affects those with disabilities, as they will not be guaranteed access on the trains unless they book 24 hours in advance. Those that feel vulnerable will not have a guaranteed member of staff on the train for help, either.

The claim that the strikers are against modernisation is ridiculous. Yes, DOO is in practice elsewhere, but this is with different trains and capacity. GTR are not replacing the current systems with better monitoring to ensure safety - they want to do it on the cheap. This is also about a commitment to the community. When these jobs go what will replace them? Something worse - and there'll be fewer of them.

This dispute is about maximising the profits of the GTR shareholders - at the expense of the public. GTR have effectively admitted this, as it was reported in leaked meeting minutes that the best way to maximise their profits was to cut wages and staff. This is due to the fact that GTR’s arrangement with the government is special and different to the rest of the country. GTR get a fixed amount of money from the government to run the service and all ticket funds go back to the government. GTR don’t need to worry about strikes or improving the service (chronic staff shortages maintained, causing disruption, no investment to improve overcapacity). They will always get their public money to line their private pockets. Plus, who pays all the compensation? Not GTR. It's the government with public money. GTR is laughing at us.

When the strikers are demonised for being militant and not negotiating it is worth remembering a few points; firstly, in September the unions agreed a deal, which the government rejected. Secondly, negotiations are exactly that - negotiations - not meetings on the condition that the conductors accept everything GTR wants to do to their livelihood. This militancy is our only stand against capitalists feeding off of our public money. This is a fight not just for the conductors but for us, our community, against exploiters and, importantly, for our safety.

It's about much more than just pushing buttons.

This article was published on 20 January 2017 by the SolFed group in Brighton. Other recent articles: