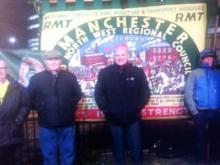 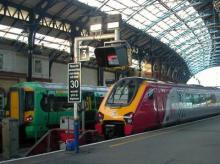 The recent strikes by conductors and train drivers - members of the RMT and ASLEF unions - have been the biggest railway strikes in decades.

As a local, Brighton SolFed has been supporting the local striking members. Our support has been through the attendance of pickets, and organising a benefit gig; to raise money for the local strike fund, and, most importantly, to show solidarity and get workers across industries together.

If you only read media reports, this would seem to be a simple dispute regarding who merely pushes a button to open the train doors.

Really, this is about our safety.

Strange goings on within the rail union RMT. The union leadership decided to close down the special annual conference on the grounds that they did not like the way delegates were voting.

To the shock and bemusement of delegates, the Assistant General Secretary, the President and a number of the National Executive members closed the recent RMT Conference and walked out. The move was well-orchestrated, and followed an overwhelming vote to remove the President from the chair of the conference. This grossly unconstitutional act is the latest move in a vindictive campaign against the perceived ‘left' within the union. So far, it has included ballot rigging in order to get a preferred candidate on the national executive, and the suspension of union activists from holding office within the union.

London tube cleaners have won crucial pay increases from cleaning companies, with their £5.50 an hour poverty wages being brought up to £7.45.

Cleaners on Metronet contracts were granted the ‘ London living wage’ in July through a wider initiative whilst those working for ISS (contracted by Tubelines) won a staggered pay rise in pre-strike negotiations in August.

With the 48hour RMT strike in June/July and the planned three day strike in August forcing the hand of ISS, the cleaners have demonstrated their strength and gained from it. However, their fight is far from over with the strike committee continuing to meet in pursuit of unmet demands - more holidays, better sick pay, a decent pension and an end to the scandal of ‘third party sackings’.

Cleaners on the London Underground chalked up an impressive victory in January when Clara Osagiede, a Cleaners Grade union secretary with the RMT (Rail, Maritime and Transport Union), had her sacking decision overturned in a disciplinary hearing with ISS, the owners of the cleaning contract on the Tube.

From 7pm on the evening of Tuesday June 9th until 7pm on Thursday June 11th 2009, London Underground workers in the Rail, Maritime and Transport (RMT) union took strike action. The main issue was job security as tube bosses flatly refused to rule out compulsory redundancies, putting 4,000 jobs at risk. London Underground originally also tried to force through a five-year pay agreement which could see significant pay cuts linked to deflation. This, alongside severe management bullying, led the workers to strike.

As the strike began, the London papers really pushed the boat out using distortions and outright lies to attack the striking workers. Claims of workers demanding 5% pay increases ignored the fact that management asked the RMT to submit a pay claim in November (when inflation was higher) while Transport for London have yet to offer anything. These sleight-of-hand tricks with the facts were coupled with barefaced lies like talks stalling over two sacked drivers on the Victoria line. This entirely separate issue, though symptomatic of wider abuses of procedure on the tube, were at no point a part of the main negotiations.

Of course, the papers also failed to mention the 123 tube managers on £100,000+ salaries, plus bonuses. Or that forty minutes before the strike, an agreement had been reached which, while the documents were being typed up, was cancelled by City Hall. These facts disappeared from media view entirely.

The theme of the media coverage was one of trying to stoke resentment against the strikers. Newspaper letters pages were filled with angry comments about ‘people losing their jobs while tube staff want more money’. We’re in recession now so we all have to tighten our belts, apparently. However, this just means that workers will be asked to tighten our belts, while our bosses continue living on six-figure salaries. Tightening our belts now doesn’t mean bosses will reward this good will in the future, rather they will see it as an opportunity for further attacks.

Rather than resent the tube workers’ struggle for jobs, conditions and pay, we should see it as a source for inspiration. As the recession continues, many of us will face similar attacks as bosses try to save money while saving their own salaries. Taking action together, like workers did on the Underground, will be the only way to protect ourselves from these attacks.