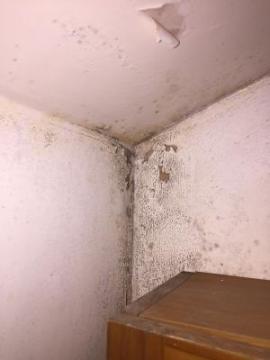 Brighton lettings agency MTM is facing a growing campaign by a group of tenants organising with Brighton SolFed for compensation after they paid £34,320 in rent to live in damp (pictured) and infested accommodation for a year. Recently, the landlady made a series of threats against the tenants. These include informing their places of study about the dispute, and attempting to get them blacklisted by agencies in the city and “all landlord associations in the country”. Regarding the former threat, we have informed the landlady that the tenants' places of study are already aware of the issues these tenants faced and have been sympathetic toward the situation. Regarding the latter, we have informed the landlady that passing on personal data contravenes the Data Protection Act, and that we would begin a campaign to get her HMO licensed revoked if she carried out such a threat.

More broadly, the landlady's actions are indicative of the uneven and abusive power dynamics that exist between landlords and tenants. Landlords think they have the right to exercise total control over tenants' lives, whilst renting substandard accommodation to them for extortionate rents. However, with the support of Brighton SolFed, these tenants are showing this landlady - and other landlords in the city - that when tenants work together, we are able to turn the tables and take control of our lives. Tenants in Brighton are (literally) sick of living in poor quality accommodation whilst being ripped off by agencies and landlords, but we are fighting back and demanding safe living conditions.

So far, we have held two pickets that have been overwhelmingly well received by the public. A number of passersby have told us of their own problems with MTM, whilst others have talked about their problems with other letting agencies and landlords in the city. On social media, commenters have expressed their sympathies with the tenants following their own mistreatment by MTM.

Tenants in Brighton and beyond will be all too familiar with the problem of damp accommodation and the effect it has on one's physical and mental health, with an investigation by The Argus last year finding a number of properties in the city riddled with damp. The mould that results in these situations often triggers health problems such as asthma, which has been an issue for one of the tenants who is now fighting back.

SolFed has supported the tenants in trying to find an amicable solution to this dispute, yet these efforts have been met with inadequate offers of compensation, and now with threats by the landlady. SolFed and the tenants are now stepping up our campaign. Our public campaign will continue until the tenants receive adequate compensation. If you would like to support these tenants against this bullying landlord and the indifference of MTM, keep in touch with us via our website and social media, to look out for information about forthcoming actions.

This article was published on 12 September 2017 by the SolFed group in Brighton. Other recent articles: