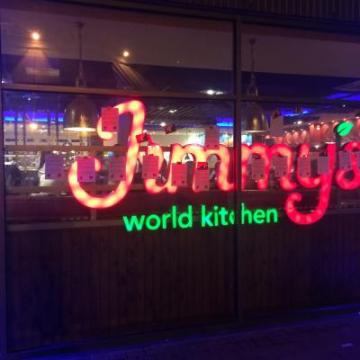 After three weeks of action, Jimmy's Restaurant (on the Brighton Marina) is still avoiding their responsibilities. Three former workers are still campaigning to get their holiday pay and their P45 documents and we keep receiving contacts of workers facing the same situation.

From the beginning, the management of the restaurant has been denying any responsibility and addressing us to the “Head Office” who, curiously enough, never answer the phone or emails.

Moreover, last week we found out that the workers, having received their payslips with their tax deductions, are not in the records of the HMRC as having worked for Jimmy's. No explanation has been given by Jimmy's but we do hope that this is a misunderstanding.

Due to the attitude of the company, SolFed has had no choice but to open a public dispute. The workers, accompanied by members of SolFed, have paid several visits to their former employer asking for what is theirs and informing the customers and other workers about the dispute. The picketers received a lot of support from their former collegues and from several customers, some of whom decided to turn back and not collaborate with this dodgy bussiness.

However, Jimmy's management seems to think that we are going to disappear if they ignore us and persist in their attitude. Therefore, last Saturday SolFed decided to take the next step and comrades from Bristol-SolFed picketed the Jimmy's branch in Bath, and we are determined to keep spreading the dispute to other cities.

SolFed and the Jimmy's workers want a solution but are determined to keep fighting if this company keeps ignoring its responsibilities.

We want to make a call out for people to join the boycott of this company until they pay. As we always say, this is not an individual problem but a collective one. We are all suffering from bad conditions at work and only through worker's solidarity are we going to improve our situation.

Boycott Jimmy's Restaurant! Stop wage theft!
Solidarity with the workers in their struggle!

This article was published on 28 March 2016 by the SolFed group in Brighton. Other recent articles: