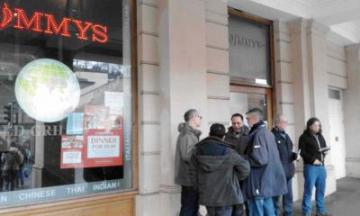 Three Bristol Solidarity Federation members travelled to Bath today (26th March 2016) on an Easter Bank Holiday weekend to picket the ‘Jimmy's' restaurant there after a request from the Brighton Hospitality Workers for collective national direct action against their bosses after they refused to pay them about £1,500 in owed wages and have yet to supply them with a P45.

On arrival the managers in Brighton were telephoned by them to explain their grievance and they were summarily dismissed by having the telephone hung up on them in mid conversation. Undeterred the brave pickets marched into the branch at Bath and politely requested an audience with the manager. The manager was informed of their current and future intentions and was also asked to contact the Brighton manager for a justification of the illegal employment practices that had prompted this disruption of his normal daily business.

Shortly after the commencement of the picket the SF members were joined by Bath anti-cuts activists.

When it became unavoidably obvious that the SF presence was having an adverse effect on the flow of custom this day the manager joined them on the picket but only to challenge them on how their behaviour was impacting his potential profits and personal, selfish career prospects! He caused such a scene that they were certain was not reassuring any random passing trade. Of course SF raised their concerns for his personal wellbeing regarding these transgressions of social etiquette. As you can imagine our sympathy was brushed aside.

After an episode of aggressive negotiations and gross motor activity combined with a quantifiable amount of agitation on the part of the management the picket made a collective decision to cease the action and convene to a local café for beverages, review the mornings work and organise their next steps. It was agreed that they had successfully made their point and that the managers of ‘Jimmy's’ in Bath were adequately distressed to the point of prompting some action on their part in this ongoing and as yet unresolved case.

Pawan, manager from the Bath branch of ‘Jimmy's’, kindly informed the SF picket that if he was phoned on Tuesday he would inform them of his progress in investigating his colleagues’ misdemeanours in Brighton. Pawan now believes that if SF do not receive a satisfactory outcome to this dispute then they will be back next weekend and the one after that and the one after that… and not only in Brighton or London but at any of their outlets anywhere in the country.

This article was published on 27 March 2016 by the SolFed group in Bristol. Other recent articles: