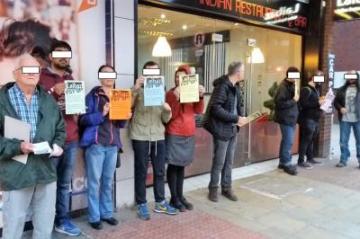 Besides the picket, the campaign has included a number of successful phone blockades as well as postering and leafleting events around Bolton. A number of demand letters have been sent to the owner of Laibaz, Sunar Alom, who continues to refuse to enter negotiations. Manchester Solfed is determined to escalate the campaign in the coming weeks if the owner doesn't change his stance towards the just demands of the campaign. The workers involved would once again like to thank everybody for the tremendous support. The fact that so many people from around the country have supported the campaign has been a real boost and has made us more determined than ever to force the owner to repay the wages he has stolen.