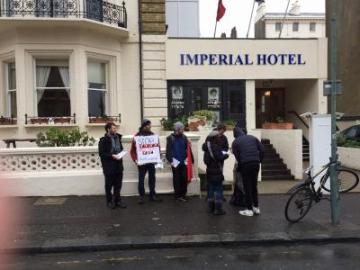 A group of 8 Brighton Solfed members gathered at the picket line. Firstly we asked to speak to the manager who, so we were told, wasn´t there at the time. We asked a receptionist to contact the manager by phone in order to schedule an appointment.  He not only refused to do so but also threatened to call the police when he learned that we were going to start distributing  leaflets.

During the picket we engaged around sixty customers, neighbours and other passers-by. Most of them were really upset about the dodgy practices of Imperial Hotel management. Once we finished distributing leaflets we informed the staff that the picket was over but that we would have to come back again unless the management met our demands. Two days after the picket, we phoned the manager. Despite being the former worker´s area manager, he denied being the person who "deals with this" and refused to refer us to anybody else. This is a clear attempt to ignore Francesco´s demands, hoping that we will eventually give up. It therefore seems that this might be the first of a series of actions!!

This article was published on 19 November 2015 by the SolFed group in Brighton. Other recent articles: