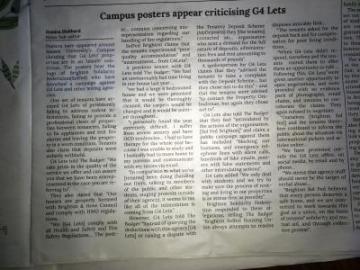 This week's Badger - the student newspaper at Sussex university - reported on our campaign against the G4 Lets. The agency - who specialise in renting to students made a group of students live in squalid conditions, the responsibility for which the local council’s Environmental Health Report placed firmly on the shoulders of the lettings agents. The tenants had to live in mice-infested, unsafe accommodation for a year, and then had £2000 illegitimately deducted from their deposit for these costs.

We had an unreasonably bad time living in our house last year and this was down to the fact that G4 lets ultimately don’t care about the people living in their properties. We were excited to move in together, we had a large 8 bedroomed house and we were promised that it would be thoroughly cleaned, the carpets would be changed and it would be painted throughout. We were also promised that the garden would be cleaned, I attach our inventory that we made ourselves in the first week at the house as we didn’t feel satisfied with the state of the property, we never signed G4 lets inventory as they didn’t give us a hard copy and when we asked if we could amend it we were basically just ignored, we sent them our own inventory and didn’t get anything back. G4 then sent the cleaners back after sending us an email thread from the cleaners saying that the house was beyond cleaning and they did a very minimal job of wiping the sides.

The worst thing about the house was the colossal mouse infestation that we were then charged for. I was careful to make sure that I never had food in my room and still had mice under my bed every nice. We first told G4 about the problem in October and the issue was ongoing throughout the whole year.

I personally found the year extremely difficult, I suffer from sever anxiety and have OCD tendencies. During our tenancy there were points when I was cleaning the kitchen in the house 4 times a day, the kitchen twice and hoovering the whole of the downstairs just so that I could sit down in the living room because the house generally just felt dirty and grotty. I had to have therapy for the whole year because I was unable to study and I basically had to move home to my parents and communicate with my tutors via email. I am lucky that I passed the year to be honest. The fact that G4 lets claim that we didn’t keep the house clean is an exaggeration. We are students for a start so we are all just figuring out how to live on our own, we have friends that lived in exactly the same way as us and didn’t have mice running all over their counters. It felt like we were in a horror movie.

The thing is fair enough, they have taken our money now and have managed to convince themselves that everything that happened to us is our fault but our aim is to reach out to younger students and tell them about our experience. University is a hard enough time without being villainised by your housing agency. You have arguments with housemates to worry about and stand offs about who’s doing the washing up and pre drinks and late nights finishing essays. So whatever you do, please don’t let a housing agency like G4 lets ruin what is supposed to be the freest and best time of your life. I won’t get those months back that I lived with my parents when I could have been out with my mates or actually going to university so I understood what was going on.

As they have done in their response to you, they’ve consistently and maliciously denied any wrong-doing in our attempts, with Brighton SolFed, to address these issues and get our deposits back. We have on several occasions tried to arrange a meeting with them to discuss the evidence pack of photographs, email chains, and invoices that corroborate our claims. On each of those occasions we have met with open hostility and as yet have seen no sign that anyone in the agency has actually engaged with our claims or addressed the evidence. Because of this, we have publicised their total lack of concern for tenants, and it’s the public aspect of this campaign that they consider to be ‘extreme’.

We now have an Environmental Health Report, in which the inspector clearly states that the house has ‘fire precaution issues, a mouse infestation, [and] poor decoration and disrepair’ that ‘represents an offence under the regulations’, and that it was the 'duty' of G4Lets to deal with this. They haven’t dealt with it, and are still trying to blame us for it. This means they’re ignoring legal demands from Brighton & Hove City Council in favour of maligning and bullying tenants. In comparison to what we’ve been doing (handing out fliers, talking to members of the public and other students, staging protests outside of their agency), it seems to me like all of the intimidation is coming from G4 Lets.

Our response to G4 Lets claims

G4 Lets make false claims about Brighton Solfed which we reponded to.

Brighton Solfed Housing Union always attempts to resolve disputes amicably first, before moving on to naming and shaming them public. In this specific case, Brighton Solfed and the tenants began this dispute by clearly outlining the ways in which G4Lets breached various different regulations (fire safety, having to show breach of the tenancy agreement to make a deduction from the deposit etc) in a letter that was delivered to them, and gave them a week to respond to the tenants demands. The tenants asked for the deposit back and for compensation for poor living conditions - it's not uncommon to be compensated when your capacity to live properly and peacefully in your home has been compromised.
When G4Lets didn't respond, ourselves and the tenants  visited them to offer them an opportunity to talk - it became clear then that the staff member (aggressively) discussing the matter with us hadn't even read the letter. As G4 Lets were unwilling to resolve the matter, we began to inform the public about how G4Lets had mistreated the tenants simply by handing out flyers to passersby outside the shop. Following this, G4Lets were given another opportunity to open negotiations, and were provided with an evidence pack of photographs, email chains, and invoices to corroborate the claims. They again refused to negotiate. Ourselves and the tenants therefore continued to inform the public about the situation via informational pickets and articles online.
At the third time of asking, they reviewed the evidence pack and admitted that £400 of the deductions were not justifiable. In response to this, they were provided with a ten-page document, further evidencing the tenants' claims, but refused to negotiate any further or to meet up to discuss the situation.
The tenants then obtained a copy of the Environmental Health Report, in which a Brighton & Hove City Council Environmental Health Officer states that the house has "fire precaution issues, a mouse infestation, [and] poor decoration and disrepair" that "represents an offence under the regulations", and that it was the "duty" of G4Lets to deal with this. G4Lets had had a copy of this report all through the dispute, and had misleadingly quoted from it to try and blame the tenants for the issues at the property. It is incredible that G4 Lets still try to justify the deductions in their response to the Badger. Once the tenants obtained the report, they informed G4Lets that they had it, sent another 3 page document of evidence, and gave them another opportunity to negotiate. They didn't respond, so ourselves and the tenants made the report public.

Solfed Housing Union has been organising housing struggles for over two years, and we have not come across any agency that is as prolific as G4 Lets in making unwarranted deposit deductions from students. Since we started the campaign, several former tenants have come forward with their stories, and comments on agency review sites and our articles also commonly mention deposit theft.

Another student described how she was served an unlawful eviction notice two weeks before her final exams - https://twitter.com/KateFlood/status/951046020141604864

This is why G4 Lets are so concerned about our campaign being public: they have something to hide, namely that they are systematically ripping off student tenants. When asked about the details of this case, they claim to be unable to discuss specifics. When held to account to their general business practices, they claim tenants must go through their bureaucratic channels - the reality is of course that tenants are at a disadvantage because they are not full-time professionals fighting for their deposit, unlike G4 Lets. G4 Lets are so accustomed to having their way that when tenants who refuse to do so, they get maligned by G4 Lets.

We have protested outside the G4 Lets office, on social media, by email and by phone. Protest and calls for boycott are not intimation - they are legitimate forms of action, they have been common practices of the union movement for centuries, and are the source of much social progress. We stress that staff should never be the target of verbal abuse - in fact we have every sympathy with lettings agency workers, whose job only serves to enrich landlords and the agency owner, and is of no genuine social benefit.

We have not made "misrepresentations" - G4 Lets should either substantiate this claim or withdraw it.

Finally, G4 Lets call us "left-wing extremists". Brighton Solfed believes that every person deserves a safe home, and we are committed to work towards this goal as a union, on the basis of tenants' solidarity and mutual aid, and through collective protest.  If that's "left-wing extermism" then so be it. However, we feel that what's 'extreme' and 'intimidating' is a business knowingly ignoring their legal responsibilities even after they've been told by the council to fulfil them, and then blaming the student tenants for the issues; what is 'extreme' and 'intimidating' is threatening to evict someone two weeks before their final exams.

This article was published on 20 February 2018 by the SolFed group in Brighton. Other recent articles: