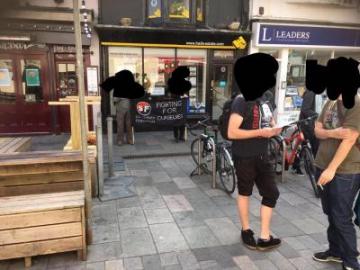 The campaign began in December 2017, when Brighton SolFed supported Patrick to write to Youngs to request that outstanding repair works on his flat were completed. In January 2018, Patrick received an eviction notice from the landlord. Following lively public opposition to this, Patrick and Brighton SolFed then attempted to open negotiations with the landlord and Youngs regarding both the eviction and the disrepair issues, though neither party has engaged productively in these. Consequently, we have escalated our campaign to include the landlord of Youngs’ office, which is another estate agency in the city called Halls. We are demanding that Halls evict Youngs – who have attempted to incite public harassment of Patrick – from their office in Kemptown, and if they won’t, we are demanding that they ensure that Youngs pay the £5,500 that Patrick is owed in compensation for uninhabitable accommodation and remuneration for work undertaken.

Following the refusal of Youngs and the landlord, Stephen Mitchell, to enter into negotiations regarding these problems, we wrote to Halls on 16th April, outlining the issues Patrick has faced. These include living without a bedroom for nine months because of damp and mould, three ceilings in his flat collapsing, renovating his bedroom at his own expense, ongoing compromised functionality in his kitchen and bathroom, and ongoing structural damp and dry rot. We presented evidence of the issues to both agencies, including pictures of the neglect, emails demonstrating that Patrick reported the issues two years ago, emails from Youngs acknowledging the existence of these issues, and emails from Youngs agreeing to pay Patrick for work he undertakes on the flat, which has not happened. Both agencies have chosen to ignore this significant evidence.

Since the start of Brighton SolFed’s campaign in support of Patrick, the owner of Youngs, David Pay, has placed the phone number of both Patrick and his partner in the window of the agency and invited the public to make contact with them, in what amounts to a serious breach of the Data Protection Act and an incitement to harassment. However, tenants in Brighton and beyond are fighting back and won’t be bullied. Instead, we’re using solidarity, self-organisation, and direct action to support one another, to guard against attacks by agencies and landlords, and to improve our conditions. Our Housing Union has been campaigning against deposit theft and poor living conditions for the past ten months, recording numerous victories against agencies across the city that had deducted hundreds or thousands of pounds from tenants’ deposits, as well as helping those tenants to gain compensation. Just as important as the money, though, is that tenants and those in other types of insecure housing have supported one another to do this, using the weapon of solidarity to fight the powerlessness imposed upon us by a housing system designed to make profit, rather than to give shelter.

This article was published on 9 May 2018 by the SolFed group in Brighton. Other recent articles: