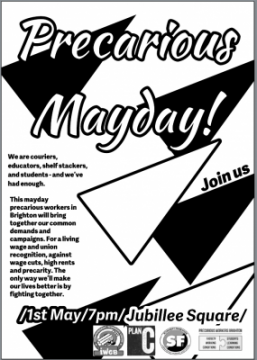 We've been holding Mayday events for the past few years, trying to bring International Workers Day back to its roots in worker militancy and anarchist organising. This year, we're joining in the call from a coalition of local grassroots initiatives organising against casualised working conditions and the housing crisis. Meet 7pm Jubilee Square - A critical mass bike block will lead the (walking) demonstration - if you want to take part in that block, just bring a bike.

We are couriers, educators, shelf stackers, and students - and we’ve had enough. This mayday precarious workers in Brighton will bring together our common demands and campaigns. For a living wage and union recognition, against wage cuts, high rents and precarity. The only way we’ll make our lives better is by fighting together.

This article was published on 27 April 2017 by the SolFed group in Brighton. Other recent articles: