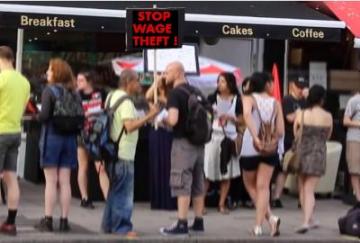 And so it was that BHW held the first of several pickets. Over the course of two months, BHW and our many supporters held eight pickets. During these pickets, V tried to bully and intimidate picketers by threatening legal action and calling the cops several times, V’s friend tried to dislodge the picket by driving his car onto the pavement and using it to push picketers out of the way (we refused to budge), and other friends of V’s even tried to follow a couple of picketers home after pickets.

But BHW and their supporters refused to be intimidated by the bullying boss and carried on picketing. The atmosphere on the pickets was high-spirited, jovial, and this was further encouraged every time V demonstrated his extremely stupid boss-thoughts (as can be seen in the short documentary shown below).

After several pickets, V gave in and offered the workers a satisfactory deal. Even after paying up, V was being difficult and threatened the workers and Brighton SolFed with legal action. It was obvious he knew he lost and was desperately trying to save face, so we just told him to fuck off.

Over the course of the conflict, we witnessed some interesting emotional transformations in all that were involved. At the beginning of the conflict, the worker was too scared to meet with V to discuss her demands or attend a picket. V displayed thuggish behaviour, he was smug and threatening, acted very macho. The Turkish community members that were in the vicinity – mostly bosses of various small businesses themselves – were hostile towards SolFed. They argued that no one should harm another’s business as it was their (the boss’) livelihood.

However, by the end of the conflict, the worker had attended several pickets and confronted V and his friends. V himself became more meek and quiet, and he looked more haggard and defeated as time went on. The community members changed their original viewpoint too; they eventually accepted that picketing was a justified way to get back owed wages. Some other bosses even tried to convince V to pay up.

These emotional transformations were reflected in the behaviour of all involved. As the worker went from being scared to drawing support from those around her and becoming empowered enough to stand up to V, V became quieter and less confrontational. The community members went from confronting picketers, to quietly observing the situation, to openly arguing with V. The regular picketers became more and more boisterous as time went on, and showed no signs of ever giving up picketing.

While we were taking direct action, two workers also explored the ‘legal options’ by talking to the Citizens Advice Bureau (CAB). It turned out that there was little that CAB could do to help - the workers soon realised that the law is enforced in a way that protects bosses and was not on their side.

During the pickets, members of the public were also shocked that bosses could get away with illegal actions. They were even more shocked that the police were called during the pickets and the boss admitted he paid less than minimum wage, yet the police did not do anything and ignored this illegal activity. Several times members of the public spontaneously joined our pickets and helped distribute leaflets. While the cops and the courts may not be on the side of workers, through solidarity and direct action, ordinary people have the power to improve our lives.

This article was published on 13 December 2014 by the SolFed group in Brighton. Other recent articles: