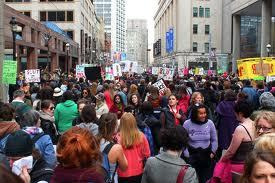 In the news recently, there have been a few articles about a cop and various politicians downplaying the seriousness of rape. These unfortunately aren’t only the words of a few ‘out of touch’ old sexist men, they reflect a wider culture that blames women being 'provocative' for rape, and excuses rapist men on the grounds that they have uncontrollable sexual drives.

The first in this recent spate of sexist comments came, surprise surprise, from a policeman – from Toronto, Canada.  He said, “Women should avoid dressing like sluts in order not to be victimised.” Similar to other common remarks, for example that some women are ‘asking for it’ by dressing in short skirts and so on, this kind of sickening comment places blame on women for being raped and places responsibility for stopping rape on women.  This inspired a series of quickly organised – mainly over the internet – massive protests, starting in Canada and the United States, called ‘SlutWalk’[1]. They point out that the cop’s comments were a

“ridiculous and inaccurate statement… incredibly damaging to sexual assault survivors around the world, painting them as perpetrators - rather than victims - of a disgusting, violent crime. In addition, it completely erased the experiences of the millions of brave, strong people who have survived rape and sexual assault - painting them as human beings unworthy of respect.”

However, SlutWalk seems to consciously object to looking at sexism as a fundamental part of our society. They do not see themselves as part of a wider feminist tradition, and they ignore the context in which blaming women for being raped is taking place, and consequently they don’t see it as a social issue or a gender issue, but one of individual, personal choice[2]. Of course, SlutWalk is not a uniform organisation and so when we discuss it we are talking about the bulk of the writing about it from participants; many people with many different ideas participate in SlutWalk. Nevertheless, the quickness with which both women and men have gathered in numbers to oppose women being blamed for being raped is inspirational.

The latest ‘gaffe’ as these comments have been called, as though they were mere slip-ups with no significance beyond the theatre of parliamentary politics, was made by an MEP (Member of European Parliament) who said:

"Imagine a woman voluntarily goes to her boyfriend's apartment, voluntarily goes into the bedroom, voluntarily undresses and gets into bed, perhaps anticipating sex, or naïvely expecting merely a cuddle. But at the last minute she gets cold feet and says 'Stop!'. The young man, in the heat of the moment, is unable to restrain himself and carries on."

Yes, he really did say that[3]. Poor man, a victim to his genetics. Again, it is up to the woman to prevent rape; the man is literally “unable” to not rape her.

This backwards take on things only makes sense if one understands men as uncontrollable animals who cannot help but act on sexual impulses. It ties into a whole stream of thinking – another one promoted by media, popular culture and politicians alike – that, to borrow a phrase, ‘men are from Mars, women are from Venus’. These essentialist (the idea that men and women have innately different characteristics) notions of gender are rubbish, and have been demolished again and again[4]. In fact, we are brought up into our respective gender roles from birth: women are emotional, men are strong and emotionless; women are good at multi-tasking and empathy, men are good at DIY and physical work; women like to gossip, whereas politics is men’s arena, etc.

The idea that women are to blame for rape is disgusting and should be challenged wherever it is found, by men as well as women. It is not a standalone issue, it is a symptom of a society engrained with sexism, on economic and cultural levels, as well as in our personal relations with each other. The occasional nod to gender equality is not enough; parliament isn’t going to hand out equality, even if it could – it’s up to us.

See also this article, ‘Rape Culture’, by the Revolutionary Anarcha-feminist Group from Ireland. Unfortunately it is not online, however you can download the pdf of their magasine, the article is on page 17: http://www.4shared.com/document/YueP5dc3/RAGISSUEONE.html

[1] A protest has been organised as ‘SlutWalk’ in London on June 11th. Meet at 1pm in Trafalgar Square, details here: http://slutwalklondon.tumblr.com/

[2] Various thought-provoking criticisms have been made of SlutWalk, which we do not necessarily agree with entirely. See, for example, http://www.peopleofcolororganize.com/activism/slutwalk-whiteness-privilege-sex-trafficking-women-color/, http://www.feminisms.org/2585/were-sluts-not-feminists-wherein-my-relationship-with-slutwalk-gets-rocky/ and http://www.feminisms.org/2703/feeling-uncomfortable-a-response-to-slutwalk-dcs-fundraiser-at-a-gentlemens-club/

We will hopefully, after discussion, write a more comprehensive article with our contribution to these various debates.

[4] For example in Cordelia Fine’s book Delusions of Gender: http://www.cordeliafine.com/delusions_of_gender.html

This article was published on 25 May 2011 by the SolFed group in Thames Valley. Other recent articles: