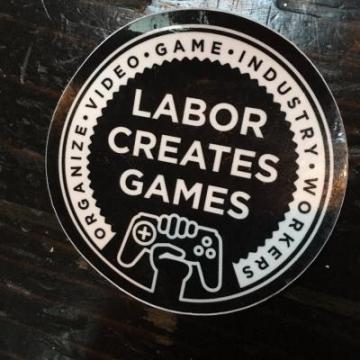 The Game Developers Conference in San Francisco (more commonly known as GDC) is one of the highlights of the game industry calendar. An annual event drawing game developers of all stripes from around the globe, it is seen as one of the premier places for developers to network, companies to show off new tech, CEOs to mingle and business deals to be made. Yet the big discussion animating conference goers at this year's GDC was something very different. Namely the unionisation of the games industry.

Unionisation has always been a topic floating around the edge of conversation in the games industry, hardly surprising given the existence of such common practices as mandatory unpaid overtime in the form of 'crunch', poor job security, low pay relative to similar work in non-games tech, and exploitative hiring and firing practices, to name just a few of the abuses rampant throughout game development. Yet until now it has always been something of a taboo with people either ambivalent about a union's effectiveness or defeatist about the possibility for change. Yet it seems that, to the surprise and joy of many, this particular tide is turning.

It was never really meant to be a huge topic of conversation at the GDC. The genesis of the whole thing was a single roundtable discussion, hosted by the International Game Developers Association (IGDA) entitled “Union Now? Pros, Cons, and Consequences of Unionization for Game Devs”. The 'consequences' part of that title is the most important thing to note. The IGDA bills itself as a 'professional association' and 'advocacy group' for developers in the games industry. It has always avoided the term 'union' like the plague and a look at its structure makes it clear why. Its top table positions are almost entirely filled by studio CEOs and other executives, and it recievsi a notable amount of industry funding. It is fairly clear to those in the know that the IGDA is essentially an 'industrial peacekeeping' organisation, and while it does have some positive programmes, it essentially exists as a defender of the industrial status quo.

This was made very clear in comments made in multiple interviews given by IGDA director Jen McLean in the run-up to GDC. In these interviews McLean essentially put out anti-union arguments dressed up as a caring concern that developers might put too much faith in a union to solve all their problems and that they may not see the (in her mind considerable) negative outcomes of unionisation. McLean as a caring figure can be hard to take seriously, given that she was previously CEO at 38 Studios, whose sudden bankruptcy led to surprised workers discovering they had been fired via e-mail and multiple legal actions in the state of Rhode Island. The negative focus and straw-man building present in these interviews drew the attention of a number of games industry workers in favour of unionising and, fearful that the roundtable was going to be used as a means of dissuading developers from considering organising, decided to act. Through private online chats, a plan of response was formed that eventually became known as 'Game Workers Unite' (GWU).

GWU says that it is itself an ' anonymous and horizontal organization of people dedicated to advocating for workers' rights and the crafting of a unionized games industry'. The group was in firm attendence at the GDC, and their badges, stickers and pamphlets ('Tips on beating all the bosses') were seen all over the venue. The group achieved their aim of pushing organisation to the very top of the conference agenda and by the time the roundtable came around, the original 50 planned seats were nowhere near enough for the nearly 200 people who crowded into the hall. GWU had also spent time prior to GDC getting in touch with many other unions, especially those in the creative industries such as the Screen Actors Guild - American Federation of Radio and Television Artists (SAG-AFTRA) and the International Alliance of Theatrical Stage Employees (IATSE). SAG-AFTRA has certainly had an effect on talk of organising the game developers; a strike by voice actors in 2016-17 was felt throughout the games industry, and led a lot of developers to wonder why they couldn't get the same kind of improved working conditions the voice actors were able to fight for. Steve Kaplan, an organiser from IATSE, was present at the round table precisely to ensure an experienced union viewpoint was present, saying 'I came here to say: 'If you’re going to have an anti-union discussion you’re going to have it with a union rep in the room.'

According to people present at the roundtable meeting, the event could hardly have gone much worse for McLean and the IGDA. McLean in her role as moderator tried throughout to turn the discussion onto the potential negatives of unionisation, but largely failed in the face of an audience solidly in support of the idea. While the discussion remained mostly civil, the atmosphere was described as intense, with all in attendance clearly passionate about the subject and chafing at the attempts at 'moderation'. Despite McLean's many attempts to lead the discussion, it is clear that she was the lone anti-union voice in the room. People sharing stories about explotiative and damaging practices they'd experienced and believed a union could fight against were roundly applauded. When McLean, seemingly in a last-ditch attempt to swing the debate onto the negatives of unionisation, asked: is there any problem the audience believed a union couldn't solve, she was met with a resounding silence. It is clear that the mood was resolutely in favour of organising the games industry. It is hard to overstate how resonant a simple sentence like that is in a previously unorganised industry like game development.

Since then, McLean and the IGDA have walked back some of their previous positions, saying that if IGDA members chose to tried and unionise, they would support it. Even though GWU says it is not yet a union, rather a group advocating for one, it is clear that their pressure has already forced the IGDA on to the back foot, having been caught off guard by the surprising wave in favour of organising. This alone shows the power of a union in a largely unorganised industry, when even the mere act of talking about unionisation can cause tremors in the established system.

The organisers of the GWU are more than aware that they are merely taking the first step on a long road, but it is clear from this year's GDC that momentum has shifted. Anecdotally, from talking to my fellow game developers about organising, the mood has definitely changed. Even as recently as five years ago, such a topic would be recieved with little more than a shrug and a response of 'Yeah it would be cool, but I doubt it will ever happen'. Today? Almost every single developer I have spoken to is one hundred percent on board with the idea, without reservations. Organisation in the games industry has moved from being an impossible dream to an absolute and immediate necessity. Either we organise now, or they'll use our passion for gaming to keep killing us for profit.

Perhaps the wave has already started. In Paris, workers of Le Syndicat des Travailleurs et Travailleuses du Jeu Vidéo (STJV) working at Eugen Systems, a strategy game developer have been on strike for three weeks over unpaid wages and unilateral job restructuring by management. They are fully organised and have set up a strike fund, yet another thing that could barely be imagined as happening in the industry until now. As Kaplan himself observed at the round table, the organisation of the games industry will be a cascading effect. The first succesful strike, the first studio that removes a negative working practice at the demand of its workers will be the first domino in the chain. With Games Workers Unite in America, the STVJ strike in Paris, and a hunger for organisation worldwide, perhaps that first domino is getting ready to fall.