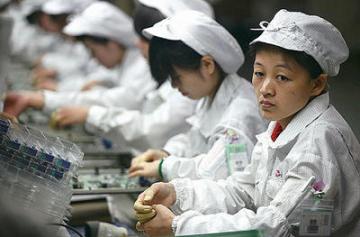 Auto, a games industry worker and SolFed member, writes about the horrific working conditions of those at the other end of his industry's supply chain; workers in the infamous factories of Foxconn. He argues that despite being halfway around the world, we're not so different after all...

Last month I wrote an article about crunch time in the games industry; the large amounts of unpaid overtime that have become a common feature of the game development cycle. However, us tech workers in the west are simply the thin end of the wedge. If you want to see true horrors of exploitation, simply spin the globe and look at to the east. To China, Taiwan and all the other new darlings of the manufacturing industry.

Foxconn are the world's largest maker of electronic components. A subsidiary of a larger Taiwanese company, Foxconn have done great business off the back of migrating western manufacture. In 2010 they had a Net Income of US$2.2 billion, and chances are you have something in your home that was manufactured by Foxconn. Own an apple product, such as an iPhone, iPod or iPad? Foxconn. Own an Xbox 360 or a PS3? Foxconn. In fact, if you own anything made by Nintendo, Acer, Hewlett-Packard, Nokia or Samsung among many more, then you own something in which Foxconn had a hand in making.

Although, it is of course not 'Foxconn' who make these things, but Foxconn's army of workers, over 920,000 of them. These workers have come into the western media spotlight for tragic reasons; namely the high number of suicides among Foxconn employees. In 2010 alone, 18 Foxconn workers attempted suicide resulting in fourteen deaths. Most of the suicide attempts took the form of workers jumping from tall facility buildings. The epidemic became so bad that Foxconn resorted to erecting 'anti-suicide nets' outside worker's dormitories. A report made by 20 universities in China found evidence of huge hours of forced overtime, unreported accidents and 'inhumane and abusive management'. The universities declared that Foxconn facilities were essentially 'labour camps' – perhaps unsurprising when Foxconn employs ex-soldiers to drill workers and provide 'security'.

A recent report by the Hong-Kong based 'Students & Scholars Against Corporate Misbehaviour' further highlighted the horrific conditions in which these workers have to live. Interviewed workers said that they were regularly required to work far beyond the Chinese legal limit of 36 hours of overtime a month. Working anything between 60 and 80 hours of overtime a month was 'normal', with one worker showing a payslip of 98 extra hours in one month. Many Foxconn workers only get to go home to see their families once a year. Unpaid early-morning assemblies, ritual humiliation for breaking rules, the list goes on.

It has been claimed that in response to the spate of suicides Foxconn, rather than try and improve working conditions, has made workers sign a contract stating they will not kill themselves and 'value their human life'. This was done apparently in the belief that workers were killing themselves in order to obtain compensation payouts for their families. In one stroke, human life reduced to no more than a mere contract clause, a liability to be guarded against. Yet it is important to realise that the conditions Foxconn forces upon their employees is not sadism for the sake of it. It is not the product of an 'bad' company, or of capitalism 'gone wrong'. These conditions exist for one purpose and one purpose alone; making money.

Every privation that the Foxconn workers suffer is inflicted upon them in the name of profit. Every humiliation they endure, every beating they take from company security, every month they work without contact with their families; these things are all reflected in that 2.2 billion dollars. Every cent of that money is built upon the suffering and even deaths of these workers. The western companies throw their hands up in horror whenever the unfortunate headlines reach the news, but do not doubt they know what is going on. They contract their work out to Foxconn because it is cheap. These western businessmen are not stupid, they know exactly why it is so cheap – hard exploitation.

Yet is it really so different here in the so-called 'first world'? In the games and technology industries the huge amounts of overtime they force upon us are symptomatic of the same philosophy. Namely the need to take people and turn them into profit through pushing them to greater and greater efforts in their labour. We are linked by more than simple supply chains, but by being forced to work under the same system.

Of course the Foxconn workers have it far worse than us. We are not often beaten in our places of work, forced to sign confessions for rule-breaking, denied contact with our families or driven to leap from tall buildings by terrible working conditions. It is true that we have far more rights at our workplaces than the Chinese employees, but why is that? It is not because the West is somehow 'better' or more civilised than the east. Nor is it because our employers are kinder or more compassionate than their eastern counterparts; after all a huge number of western businesses openly collaborate in the oppression of workers in foreign countries.

No, we have these rights because they are the product of centuries of labour struggle by workers who once suffered to work in conditions no better than those seen in the factories of Foxconn. Capitalism has not changed it's nature and softened over the centuries, the drive to make profit is just as savage as it ever was. If we in the west are better off it is because we stood up and fought back, refusing to submit ourselves to drudgery and death in order to become a mere positive number in an accounting book. The workers at Foxconn are not workers in some different world to ours but are fellow members of the chain gang to which we all belong, working for the benefit of the few instead of for ourselves. The story of Foxconn is not one of 'foreign ways' but an image of what our future shall be if we let up in the struggle for ecomomic and social freedom.

We must remember this; our struggle is a global one. These Foxconn workers are just as much your brothers and sisters as the co-worker sat at the desk across from you. If we truly wish to help workers in foreign lands, the answer isn't to be found in product boycotts or appeals to 'international law', but must be found in the application of international worker solidarity, the commitment to continue our shared struggles, and the desire to bring down this whole system which reduces our human lives into mere clauses in contracts.