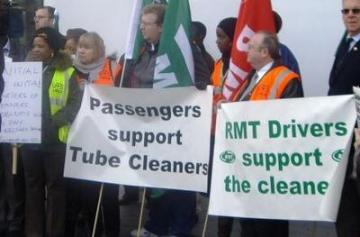 Tube cleaners’ union RMT has demanded an end to “appalling intimidation“ of members involved in a 48-hour strike for a living wage on, one on July 1st-3rd. Tube cleaners also engaged in a 24-hour strike on June 25th-26th.
The union is gathering evidence that cleaners have been bullied, harassed and threatened with the sack and with illegal punitive deductions from their wages if they take strike action.
“Reports coming in from picket lines over the last 36 hours indicate that the employers are so desperate that they are resorting to gangster-style intimidation and using the worst sort of fear tactics to stop more people joining the strike, “ RMT general secretary Bob Crow said today.
“That is testimony to the effectiveness of our 700 members’ solid action and the fact that RMT membership has grown since the strike began, but it also underlines the scale of the problems our members have to endure down there.
“Managers have been threatening people with the sack if they join the strike and telling them that they will have sums deducted from their wages that are way above what they could have earned during the strike.
“Others are being told blatant lies, such as they are not allowed to join the union after the strike ballot.
“At Stratford seasoned reps are telling us that they are appalled at the level of intimidation they have seen and at the squalid conditions ISS cleaners there have to endure, with men and women having to change for work together in a tiny store-room with no privacy.
“This is also where workers have to race each other to work in the morning because managers allow the number they require to book on and send the rest home without pay.
“That is disgusting wherever it happens, but on one of the world’s most prestigious metro systems it is inexcusable, and we hope Londoners will join us in demanding an end to the disgraceful exploitation that is taking place in their name, “ Bob Crow said.

The 48-hour strike by 700 tube cleaners working for cleaning subcontractors ISS, ITS, ICS and GBM on London Underground began at 18:50 on Tuesday evening and ended at 19:00 on Thursday evening. The cleaners' demands are a wage increase - to bring their wages up to the London Living Wage of £7.20 rather than the £5.50 many find themselves on now - as well as 28 days holiday, sick pay, decent pensions and travel facilities, and an end to the barbaric practice of ‘third-party sackings’ in which cleaners can be dismissed, with no disciplinary hearing or right of appeal, at the behest parties other than the employer - a device used to get rid of union activists.

South London SolFed have been invovled in supporting the strikers, below is a report on an action we were invovled in.

On Wed 13thAugust around 30 protestors turned up at the Greenwich offices of multinational cleaning comany ISS to protest against the letter sent out by the company to dozens of tube cleaners requesting they come in for a 'document check' that day.
It is clear to the cleaners' union RMT that this is part of the reprisals against the tube cleaners for the 3-day strike in support of a Living Wage which they held in late July. Activists and reps among the cleaners have been targetted, with a view to break union organization.
A lively picket of the 15 Park Vista office was held with people from a variety of groups and unions brought together under the the banner of the Campaign against Immigration Controls. At the same time a number of concerned citizens entered the foyer of the premises in case the ISS managers were unable to hear the message properly. However the managers lost their cool and called the police, while refusing to allow in union reps, who had arrived separately. They argued that the picket was upsetting the neighbourghood peace and quiet, while demonstrators argued back that the detentions and deportations and union busting their paper checks cause is a bit more upsetting. One protestor was arrested and is currently out on bail.
Undeterred the cleaners will be on strike again from 21 August at 5.30 am till 23 August. This time support is expected from cleaners in Unite-T&G and coincidentally engineers on Tubelines will be on strike at the same time.
ISS will talk to the RMT at ACAS on Monday morning. This is the first time they have agreed to talk to the union since the dispute for the London Living Wage began. The RMT is calling a demonstration at 9.30am on Monday outside the ACAS offices, opposite Borough tube.
A public meeting on these and all current tube disputes is to be held by the RMT union at Friends House Euston Road on Tuesday 19 August at 6pm.
Also see these reports
http://www.indymedia.org.uk/en/2008/08/407016.html
http://www.newstatesman.com/uk-politics/2008/07/feminist-fightback-women...
http://www.workersliberty.org/story/2008/08/23/justice-4-tube-cleaners-t...

This article was published on 24 September 2009 by the SolFed group in South London. Other recent articles: