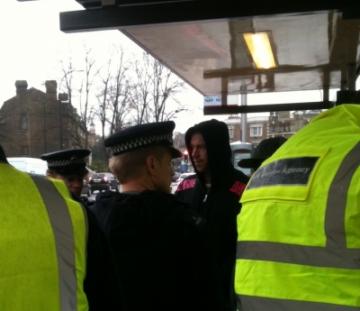 On my way to work this morning I found the bus stops around New Cross bus garage swarming with police and UKBA immigration officers. I saw a man being questioned by immigration officials and surrounded by several police under the bus shelter. This was a bit weird and unnerving so I sent a mass txt out to warn people and pass on the message.

Whilst I was doing this a bus stopped and people started piling out. I spotted a plain clothes officer (see hoody in pic) eyeing someone up and start moving so I shouted at him. I asked if he’d seen someone he didn’t like the look of and made everyone aware that he was an immigration officer (probably police in hindsight). He stopped to have a go for a moment then turned for his target, so I questioned him about his outfit. This seemed to annoy him; apparently “its chilly” is a reason to wear a hoody and “I don’t have to dress like them” is a reason not to. This altercation lost him enough time and he went back to the pack without his catch.

The most interesting part of our discussion was when I asked him on what basis he was stopping people. He told me that they were stopping men from African countries such as Ghana as there is a “big problem with them around here”.

According to UKBA enforcement guidance and instructions Chapter 31.19 pg 21

In practice this means that someone has to look shifty when they see an IO for them to be stopped. This practice (known as STOPs) have been supposedly suspended in London since 2008, though reports suggest otherwise.

So the hooded man was probably police, picking up people based on race to hand over to the Immigration Officers with clipboards. This is known as a Crime Reduction Operation (aka a CROP) and seems, unfortunately, to be legal.

The interesting thing I discovered about this little loophole is that it could be avoided if you don’t agree to talk to the Immigration Officers. As the UKBA enforcement guidance and instructions state:

“…any questioning after a referral (from police) must be on a consensual basis. Only if the individual consents to being questioned and the IO then forms the suspicion that an immigration offence has been committed could” they be stopped and questioned.

So refuse to talk to the men in Hi Vis UKBA vests and you could be fine. The law on this is a grey area though.

Wish I’d known this at the time. When I was suggesting “no comment” to the man being questioned at my bus stop it was too late, they’d already started speaking to him and got their “reasonable suspicion”. They put him in the van.

According to a Freedom of Information request made following a Guardian article questioning the legality of these stops, there were 157 CROPS conducted in 2010/11 and 153 arrests were made as a result.

In March, 90 people were arrested outside a music venue in Elephant and Castle as part of an immigration raid. Now nowhere is safe; workplaces, music venues, bus stops. We need to act in solidarity with immigrants wherever they are being stopped.

This article was published on 18 April 2012 by the SolFed group in South London. Other recent articles: