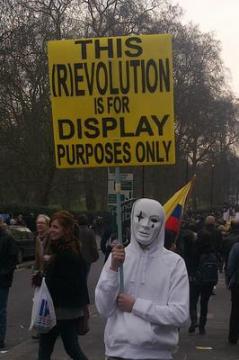 Members of Northampton Solidarity Federation joined the masses on the streets of London on March 26 to protest against the brutal cuts being imposed by the government.

People were marching for many reasons: some still accepting the idea that cuts are necessary but wanting to slow them down or alter the focus, some suggesting that investment rather than cuts would stimulate the economy which in turn would reduce the deficit, many pointing out that if taxes were fully collected and if military interventions were curtailed the cuts would not be necessary.

Our message is that these cuts are not necessary, but that they arise from the continual class war between the capitalist elite and the working (and unemployed) masses.  Distribution of wealth in society polarised greatly under the Labour government and now, on the back of a greed fueled crisis we face an unpecedented attack on the social wage, on the conditions of work and life for the great majority of the population.

Meanwhile, the rich continue to walk away with £millions: bankers' wages exceed their earnings before the crisis and wealthy magnates can capitalise on low property prices.  Food prices rise as a result of traders' actions and profiteering.

Our call is not for a slowing down of the cuts.  Nor is it to ensure that taxation is collected to render the cuts unnecessary.  Our call is for a radical change of the way our society is structured so that we are not subject to the demands and foibles of the capitalist elite.  It is for society and production to be taken into the hands of the working class themselves.  An end to capitalist tyranny.

This demonstration must mark a begining, not an end.  One banner we saw during the day declared "This (R)evolution is for display purposes only".  If it only goes as far as a walk through the streets of London, that will be one of the truest statements of the day.

This article was published on 27 March 2011 by the SolFed group in Northampton. Other recent articles: