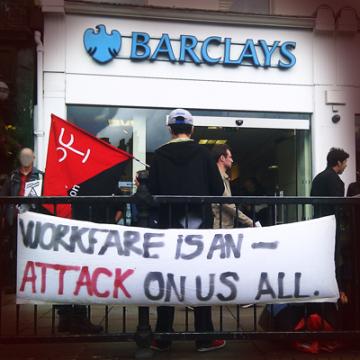 About 20 people took the trip to Angel station and trod the pavements of Islington, handing out leaflets, talking to the public and explaining how when a company takes on large numbers of people straight off JSA to do its unskilled jobs this is less "work experience" (the government's Orwellian newspeak) and more "removing any incentive for companies to actually pay people."

On the whole the day went swimmingly, the weather held up, the crowds were polite and best of all there was a captive audience at the bus stop just in front of the bank, who we ruthlessly showered with literature and explanations about why all these flag-wielding lefties were hanging around.

Thanks to all who turned out, along with the many many people who listened patiently and gave us a friendly grin or word of support. We'll be back in action on the 14th somewhere in Hackney - shout us on Facebook or email us at nelsf AT solfed.org.uk if you want to get involved!

This article was published on 7 July 2012 by the SolFed group in North London. Other recent articles: