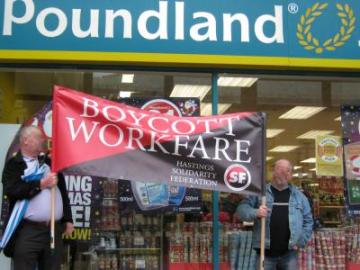 On Saturday a group of us formed a protest outside Poundland in Priory Meadow shopping centre Hastings against their continued use of the government's workfare scheme. Although few in number we made a very big impact. The first action was to send someone in store to put anti workfare leaflets on the store's shelves. At lot of customers pick these up and read them. We then stood outside the shop front with our banner and handed more leaflets and talked to members of the public. We got a good response and at least 15 people would not shop there after talking to us.

The store supervisor came out and told us we would have to move as it was private property - we refused as it is a public area. The centre security staff turned up and told us the same and asked for our names we refused on both points, so they called the police. The manager of the store then came out and said they were not using workfare then changed her story to they did use it but it gave people jobs?????

It became obvious that the police were not coming, so the head security card resorted to threatening us with things like we would be banned from the shopping centre and we would be sent the bill for cleaning up any dropped leaflets. This attracted quite a crowd who were often vocal in their support of our actions. The police never did show up. We continue to take direct action against Poundland and others till they stop using Workfare.