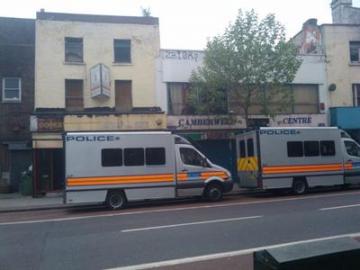 Police raids on anarchist and progressive social centres in Brighton and London ahead of the royal wedding amount to little more than the force giving the media a good yarn while attacking political activists, according to anarchist union group the north London Solidarity Federation.

"The Met is well enough informed and funded to be fully aware of what anarchists have planned for tomorrow - which mostly amounts to taking a nice day off and avoiding the telly. Even people who think of anarchists as just thugs must surely realise that no-one's going to be stupid enough to seriously kick off in the middle of a crowd of tens of thousands of monarchists supported by thousands of police?

"This is just politics on the part of the force, Met bosses showing the press that they're 'doing something' and getting some nice additions to their database of political dissidents after a deluge of bizarre scare stories. No doubt this will be passed off as reasonable behaviour, rather than as the chilling harrassment of anyone who's prepared to stand up and fight against coalition cuts.

"What's particularly odd is the targetting of a community garden initiative. What are they expecting from these people, an attack with sharpened trowels?

"Regardless, it should be made clear we are not going to be intimidated by such goon-squad tactics."