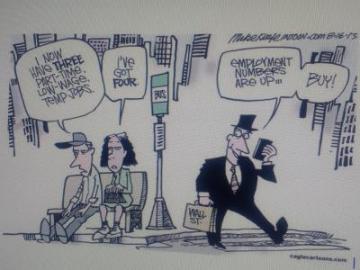 The practice of underemployment puts management into a powerful position, enabling them to dictate working conditions and create a workplace culture of fear and permanent insecurity, where workers feel they have to put up with just about anything or risk being sanctioned by not being offered any extra hours available. Studies have shown that, where there is a high level of underemployment, the culture of the workplace is characterised by discrimination, sexual harassment and assault, high levels of stress and mental illness, bullying, arbitrary rules, favouritism and wage theft. It can also make balancing work, childcare, and school a nightmare given the need to take on extra hours often at short notice to make up pay.

“We only find out on the day, or the day before, about how many hours we will work and about our start and finish times. I am a single mother of two children and it is very difficult for me. ”

The reality behind underemployment was revealed in a survey of 450,000 USDAW union members. The survey was largely of workers in retail, warehouse and distribution along with road transport.  The survey revealed that 60% of respondents have contracts for 30 hours or less. Almost two-thirds (64%), of those taking part in the survey, regularly work additional hours above their contracted hours. The survey found that two-thirds would like these extra hours to be guaranteed.  It also found that one in every three of respondents said they would like to work longer hours.

The survey also found an increasing use of agency workers with one in twenty workers (5%) reporting that at least half of the workforce are agency staff. It was also found that many workers have to take on extra jobs to make ends meet with 8% having a second job, with a further 20% looking for a second job. The survey also shows an alarming increase in the use of short-hours contracts - contracts of 10 hours or less - as a means of avoiding the bad publicity now associated with zero hours contracts. The overwhelming majority that took part in the survey stated they wanted more job security and guarantees over hours with 98% stating that they believed that workers should have a right to contracts that reflect their normal hours.

The USDAW survey is alarming as it points to a big growth in underemployment in the traditional sectors of the economy where it has generally been assumed jobs are more secure. It now appears that these sectors are moving towards the conditions found in the “gig” economy, where the majority of employees' hours vary from week to week according to business needs.

“Agency workers at my workplace are very unhappy with the way they are treated. They come into work; many have spent up to £6 just to get to work; when they arrive, they find that they are sent home after one hour.”

That big-named companies are now using underemployment, as a means to cut cost and increase profits, should not come as too big of a surprise.  This process has been underway in the US retail sector for many years and has become commonly known as “short shifted.” In the US, retail companies have introduced just in time scheduling” and use other “lean” manufacturing practices managing an increasingly part time workforce and cut wage cost to the bone.

The key to the introduction of these “lean” manufacturing practices has been the use of the latest technologies, which has allowed retailers to track sales patterns and predict labour costs with far greater precision. This has enabled US retailers to cut or increases workers hours in line with fluctuations in business.  For example, if there is bad weather, the scheduling algorithm can indicate that employees should be sent home before their shift ends. Another example is to use detectors embedded in the welcome mat in shops that measure conversion rates — how many people enter the store in relation to how many walk out with bags — and plan work schedules accordingly.

Methods like this, have allowed, even large retail companies employing thousands of workers, to tailor the working hours of individual workers to cut cost. To the extent that companies are able to use sales per hour of individual workers for one week to determine their work schedule for the next. This not only cuts cost, it puts constant pressure on workers to sell more or have their hours cut. This has led to guaranteed full time employment increasingly the preserve of managers and long-term employees with the majority of the workforce on part time contracts with many in constant need of extra hours.

“I’m not considered full-time but during the holiday season I work full-time hours. Only managers can get full-time status officially.”

Not surprisingly these “lean” manufacturing practices has spread beyond retail in the US and are now being used in fast food and full-service restaurants, hotels, entertainment, construction, and information sectors. The USDAW survey would indicate that “lean” manufacturing practices are being imported into the UK economy.  Amazon, for example, regularly sends workers home when not enough work is available and uses the practice, common in US retail, of getting workers to compete with each other for the reward of extra hours.

In the UK, much has been made of the dangers posed by new technology and focus has rightly been on increasing automation and the threat to jobs. However, the danger of technology being used to casualise low-tech “unskilled” jobs, is just as real. This may well have big implications for the future of work in the UK. Already there is evidence that, in the UK, companies are reluctant to invest in labour saving technology due to the price of labour being cheap. With new technologies been used to drive down labour cost, making automation less cost effective, we may well see the workforce increasingly dominated by state subsidised, underemployed workers, whose lives by necessity revolve around the constant to need to work more hours to make up pay. A scenario even more likely, should some form of universal basic income be introduced.

As a union, Solidarity Federation is committed to developing new methods of organising to meet the challenges of a rapidly changing economy. Part of which includes running a workplace organiser training course which is open to everyone. For more information contact training@solfed.org.uk.

This article was published on 12 July 2018 by the SolFed group in Manchester. Other recent articles: