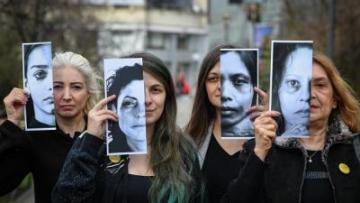 Abusive men are using coronavirus as an excuse for domestic violence, campaigners have warned, as horrifying new figures reveal men are killing women and girls at a rate of almost one a day since the lockdown began. This represents a doubling of the average rate of deaths and highlights the extreme danger faced by women and girls trapped in the same house as violent partners and other male relatives.

Figures show that almost one in three women aged 16-59 will experience domestic abuse in their lifetime. Meanwhile, reports from those countries worse affected by the coronavirus show that domestic violence is increasing. This is hardly surprising, as women and girls will find themselves at an increased risk of all forms of abuse-based violence, as they are trapped with perpetrators and there is a lot less scrutiny. There is also clear evidence that financial hardship caused by the coronavirus will increase levels of domestic violence; for example, during the Greek financial crash in 2011 there was a 53.9% increase in family violence.

Given these horrors, there is much to be done, from trying to support women that may be experiencing domestic violence through to putting pressure on the government to release emergency funds to hard pressed domestic violence support services. Once the crisis has passed, there must be no return to the austerity that has done so much damage to women trying to escape abusive relationships, not least in the brutal cuts to government funding of women’s refuges.

Part of this has to be raising the issue of domestic violence in the workplace. Domestic abuse does not stop once women leave home. Surveys show that up to 53% of women suffering from domestic violence have reported that the violence has continued at or near their workplaces. This can take the form of abusive emails and phone calls through to partners turning up at work and making threats or stalking women outside their workplaces. In extreme cases, women have been killed by their partners or ex-partners in the workplace.

Domestic violence also impacts on women in the workplace in ways that often result in them losing or leaving their jobs. In a TUC survey, 80 per cent of women who had experienced domestic violence reported that the violence had affected their work performance due to being distracted, tired or unwell. Other research has found that 56 per cent of abused women arrive late for work at least five times a month and 53 per cent miss at least three days of work a month.

Ultimately, the best way to support victims is to organise your workplace and make domestic violence an issue as a means of forcing employers to act. Demands can be made to bring in paid leave for victims and introduce safety policies, such as changing or screening work phone numbers or emails, providing a security alarm, providing transport to and from work, or alerting security staff to potential threats. All of this creates a supportive workplace culture in which victims feel they can begin to talk about the abuse they are suffering.

If you are interested in organising in your workplace the Solidarity Federation run a number of training courses including a training course aimed at women who wish to organise in their workplaces. For more information email solfed.training@gmail.com

This article was published on 20 April 2020 by the SolFed group in Manchester. Other recent articles: