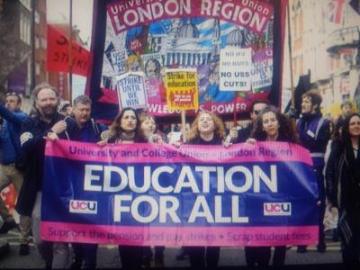 We are in the midst of the country’s biggest university strike ever in a dispute over pensions and the “four fights” of equality, pay, workload and casualization. On the last front, in some universities, there are up to 70% of lecturers who are on hourly paid or fixed term contracts. These are convenient for universities in what has grown to be a highly casualized sector but provide no security for workers who have often trained for up to ten years in their chosen subject. The representation of women and BME workers is also a key issue that the University and College Union is seeking action on. If we consider those in the higher positions of what is a heavily hierarchical university world, most are white and most are male.

According to UK legislation, trade unions seeking to strike or take some form of industrial action need at least a 50% vote in favour under legislation designed to hinder workplace organization and militancy. On this occasion, tens of UCU branches at universities managed to pass this threshold and, following a re-ballot of some institutions where this had not been achieved, there are now over 70 universities that are striking either over pensions or the “four fights” or both. This is unprecedented and shows the depth of feeling among academic and academic-related staff (those who work, for example, in university libraries).

The response from the employers’ organization, UCEA and other bodies, has been slow and the UCU has rejected as inadequate some concessions on pensions and vague “commitments” to reducing inequality in the workplace. It would appear, however, that in this second week of strike action, some further ground has been ceded and members await the results of this negotiation. We are prepared for two further weeks of strikes if an unsatisfactory offer is made and the UCEA is evidently deeply concerned about the strength of anger and militancy that this dispute has produced. We are fortunate to be supported by other campus unions and by a large body of students who understand the stresses and strains under which the system is being placed.

The strikes send a strong message to the effect that our pensions will not be hijacked, that equality issues are not mere “academic issues” to be discussed in modules or entered on to performance graphs and that we deserve a pay increase after a decade of stagnant wages that barely keep up with inflation. The strikes also open a vista on to what a different kind of university could look like. We have, however, been here before in some senses and it is a matter of keeping up this momentum and this alternative vision. Indeed, in part, these strikes are a result of keeping the flame of a non-commercial neo-liberal university system alive, an objective that constantly surfaces during this and previous disputes. Now is the chance to see through these changes with a resounding victory for university staff across the country. Now is also the moment to be considering what steps may need to be taken to secure a victory in the future if the offer the employers put forward is unsatisfactory. Unpalatable to some though it may seem, what won our 11% pay increase ten years ago was the threat of a marks and examination boycott. This weapon should be retained in our armoury if needs must.

This article was published on 28 February 2020 by the SolFed group in Manchester. Other recent articles: