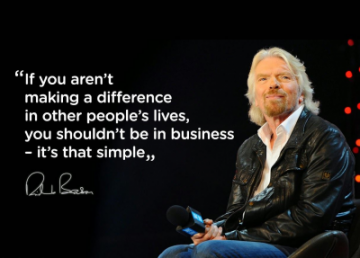 Good old Sir Richard Branson has once again managed to get himself to the front of the queue for state handouts. Having spent years channelling public money into massive profits at Virgin Rail, he is now turning his attention to milking the NHS. Figures released in January 2018 show that his company, Virgin Care, won a record £1bn worth of NHS contracts in 2017. Added to already existing contracts, this means that Virgin Care now has over 400 separate NHS contracts. Funny how these arch free market capitalists, such as Branson, seem to be able to swallow their anti-state principles when it comes to claiming state subsidies. Good old Sir Richard even took this to the extent of suing the NHS in 2017 when Virgin Care lost an £82m contract. In the process he won an undisclosed sum that otherwise would have been wasted on treating sick people.

However, try not worry, capitalist pin up boy Branson's love of the state does not extend to paying UK taxes. All his companies come under a single parent company, Virgin Group Holdings, based in the Virgin Islands, which just happens to be a tax haven. He has moved on since being prosecuted for tax evasion in 1971, learning quickly that it is ok not to pay taxes in the UK just as long as you wealthy enough and well enough connected.

Perhaps we are being a bit too cynical here; after all, when it was first disclosed that good old Sir Richard pays no UK taxes, he explained that he lived on his private Caribbean island, Necker Island, for health rather than tax reasons. No doubt he will bring this concern for health the NHS to ensure that Virgin Care runs its contracts in the same way Virgin Rail runs trains. The difference, however, is that the “customers” will  pay the cost, not in terms of overcrowded and continually late trains, but rather in terms of damage to their health.

Nor should we run away with the idea that Branson’s failings are limited to Virgin trains. Behind the winning smile and easy manner, the country’s favourite entrepreneur has a long history of failed businesses. Virgin Cola, hailed by Branson in 1994 as the inevitable successor to Coca-Cola, has practically disappeared. Virgin Clothes, launched on the stock exchange in 1996, folded with losses to shareholders. Virgin Money was launched with a glitzy advertisement featuring Branson emerging naked from the sea, but did not deliver the expected big financial rewards. Then came Virgin Vie, Virgin Vision, Virgin Vodka, Virgin Wine, Virgin Jeans, Virgin Brides, Virgin Cosmetics and Virgin Cars, none of them fulfilling their creator's inflated dreams.

Virgin Express, an airline based in Brussels, was intended to rival easyJet, but the original investors on the stock market lost their money. Similarly, the McCarthy brothers, who invested over £30m in V2, Branson's second music company, lost all their money and faced personal bankruptcy. Australians who invested in the 2003 flotation of Virgin Blue, a no-frills airline, rewarded Branson with over £200m for a stake of his original investment. Initially the airline was successful, but soon after Branson pocketed the money, shareholders watched the share price fall. Similarly, plans in which GPs would be paid or, more accurately bribed for referring NHS patients to private Virgin services were abandoned in June 2008. The BMA warned that the plan would “damage clinical objectivity”, as there would be a financial incentive for GPs to push patients toward the Virgin services.

Nor is the problem limited to the fact that the only way good old Sir Richard seems able to make companies successful is by ripping off either the taxpayer or the investors. Over the years he has been involved some “underhanded business practices” – we can never use the term “criminal activities” when discussing what rich people get up to. For example, in 2006 competition authorities in both the UK and US investigated price-fixing activities by Virgin Atlantic and British Airways. British Airways was fined £271 million over the allegations while good old Sir Richard received no fine, which the Office of Fair Trading defended as being in the “public interest”, as Virgin Atlantic had cooperated in helping to prosecute British Airways.

Given good old Sir Richard’s dodgy record, you might be wondering why the Tories are handing over NHS contracts to Virgin. Well, there is a bit of a problem here. The Tories, for ideological reasons, hate the NHS; in fact they hate just about any human activity not motivated by greed and narrow self-interest. But they face a British electorate that steadfastly refuses to accept the free market orthodoxy that the level of health care received should be determined by the size of a person’s purse. Knowing that outright privatisation would result in electoral suicide, the Tories have embarked on a two stage privatisation. They are running the NHS into the ground by starving it of funds while, at the same time, slowly selling off the NHS a piece at a time.

The first part of the strategy is well underway with the NHS in a state of almost permanent crisis. At the time of writing, we are in the middle of the annual “winter crisis”. The aim of this state of permanent crisis is to slowly erode confidence in the NHS until a point where people feel there is little choice but wholesale privatisation. We are now constantly being told that the nation can no longer afford the NHS. The second part of the strategy is also beginning to pick up a pace. The figures for 2017 show that £3.1bn of NHS contracts were won by private sector companies, which represents more than two fifths (43%) of a total of £7.2bn in contracts tendered by the NHS, and outstrips the £2.55bn (35%) of tenders won by NHS trusts. Meanwhile, that other privatisation Trojan horse, the “not-for-profit” sector, won £1.53bn (21%) of contracts. Given this scale of privatisation, it is only a question of time before the NHS becomes a minority provider of health services.

In going about privatisation, the Tories have learnt a trick or two from that close friend of good old Sir Richard, good old Tony Blair, by keeping services free at the point of use while slowly privatising the service providers. The problem is that these privatised service providers often make a complete hash of things. There are numerous examples to choose from: Serco ended its contract to provide out of hours GPs after staff falsified data about its performance while Coperforma’s £63.5m takeover of non-urgent patient transport to hospital ended shambolically after patients awaiting dialysis and chemotherapy missed vital appointments. The point here is that, if the Tories’ privatisation plans are to work, you cannot have companies that take over NHS services continually fucking things up.

Enter man of the people and all round Mr Nice Guy, good old Sir Richard. Though his reputation may have been tarnished of late, the one thing Branson is good at, apart from making money, is public relations. A few well placed, well publicised donations to the right causes, along with the backing of the media, and it is not hard to see him regain his status as a national treasure, a national treasure at the head of an increasingly monolithic private health provider kept afloat by public subsidies and capable of challenging the dominance of the NHS. This, in other words, is a Tory wet dream, which might explain why Virgin Care won just under a third of the total number of NHS contracts awarded to the private sector in 2017.

As anarcho-syndicalists, we have many criticisms of the way the NHS works, not least its totally undemocratic structures. Though we favour a community controlled and run health service, we find the prospect of people’s health being handed over to the tender loving care of the likes of Branson utterly appalling. So be aware, if privatisation is not stopped and you are unfortunate enough to get ill, you may be faced with having to look at giant pictures of the smiling face of good old Sir Richard in the ambulance, in the hospital, in the operating theatre and, well, just about everywhere. Some might think death would be more preferable. Let's hope for better luck next time good old Sir Richard crashes his hot air balloon!!!

This article was published on 11 January 2018 by the SolFed group in Manchester. Other recent articles: