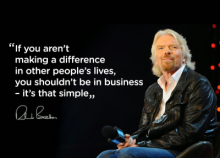 Good old Sir Richard Branson has once again managed to get himself to the front of the queue for state handouts. Having spent years channelling public money into massive profits at Virgin Rail, he is now turning his attention to milking the NHS. Figures released in January 2018 show that his company, Virgin Care, won a record £1bn worth of NHS contracts in 2017. Added to already existing contracts, this means that Virgin Care now has over 400 separate NHS contracts. Funny how these arch free market capitalists, such as Branson, seem to be able to swallow their anti-state principles when it comes to claiming state subsidies. Good old Sir Richard even took this to the extent of suing the NHS in 2017 when Virgin Care lost an £82m contract. In the process he won an undisclosed sum that otherwise would have been wasted on treating sick people.